Floppy disks, CD-ROM
Sid Meier's Civilization is a computer game created by Sid Meier for MicroProse in 1991. The game's objective is to develop a great empire from the ground up or in other words: "...to build an empire that would stand the test of time". The game begins in 4000 BC, and the players attempt to expand and develop their empires through the ages until modern and near-future times. It is also known simply as Civilization, or abbreviated to Civ or Civ I. It is generally acknowledged to be a pioneer in the genre of turn-based strategy games.

In 1996 Computer Gaming World named Civilization as #1 on its Best Games of All Time list on the PC.

This game has been one of the most popular strategy games of all time, and has a loyal following of fans. The degree of popularity may be discerned from the observation that in an industry where the lifespan of a product typically averages 6 months or less, this game (by means of all its versions and updates), has endured for over a decade and a half, with product being offered for sale the entire time in retail stores. This high level of interest has spawned a number of free software versions, such as Freeciv and C-evo, and inspired similar games by other commercial developers, as well.

CivNet was released in 1995 and was a remake of the original game with added multiplayer, improved graphics and sound, and Windows 95 support. Gameplay was almost identical to the original game. There were several methods of multiplayer, including LAN, primitive Internet play, hotseat, modem, and direct serial link.

In 1992, Civilization won the Origins Award for Best Military or Strategy Computer Game of 1991.

In November 1996 Computer Gaming World's Anniversary Edition, Civilization was chosen the #1 of the 150 Best Games of All Time, and it was described as follows:

"While some games might be equally addictive, none have sustained quite the level of rich, satisfying gameplay quite like Sid Meier's magnum opus. The blend of exploration, economics, conquest and diplomacy is augmented by the quintessential research and development model, as you struggle to erect the Pyramids, discover gunpowder, and launch a colonization spacecraft to Alpha Centauri. For its day, Civ had the toughest computer opponents around - even taking into account the "cheats," that in most instances added rather than detracted from the game. Just when you think the game might bog down, you discover a new land, a new technology, another tough foe - and you tell yourself, "just one more game," even as the first rays of the new sun creep into your room... the most acute case of game-lock we've ever felt."

Meier admits to "borrowing" many of the technology tree ideas from the board game Civilization, published in the United Kingdom in 1980 by Hartland Trefoil (later by Gibson Games), and in the United States in 1981 by Avalon Hill.[2][3] The early versions of the game even included a flier of information and ordering materials for the board game. In an ironic twist, there is now a board game based on the computer game version of Civilization. The parallels to the game Empire (1977) are also remarkable.

As of late 2004, Atari, the latest publisher of a Civilization game, sold the intellectual property of the Civilization brand to Take-Two Interactive, who distribute Civilization games under the 2K Games label. Take 2 went public with news of the sale on January 26, 2005.

In 1994 Meier produced a similar game called Colonization. Colonization, while being very similar to Civilization, never became quite as popular. It has also been criticized for leaving out slavery and other historically important features in the creation of many nations and empires. Civilization IV, however, recognized slavery in the game play, as had imitator CTP earlier.

The game Sid Meier's Alpha Centauri is also by Meier and is in the same genre, but with a futuristic/space theme. Many of the interface and gameplay innovations in this game eventually made their way into Civilization III and IV.

In 1993 MicroProse published Master of Magic, a similar game but embedded in a medieval-fantasy setting where instead of technologies the player (a powerful wizard) develops spells, among other things. The game also shared many things with the popular fantasy card-trading game Magic: The Gathering.

In 1994 Stardock released Galactic Civilizations, a similar turn-based strategy game for OS/2 which became one of the best-selling games for that platform. They released a reprogrammed Windows version in 2003, and a sequel in 2006.

The designers of the historical strategy game Age of Empires received much inspiration from Civilization, with many similar features (e.g. technologies, wonders). The main difference here is that Age of Empires is not turn-based, but plays in real-time.

An introduction shows when a new game is started in Civilization. The intro was added to give players something to look at while the game world was being created, though it can be skipped.

The following words form the actual introduction of Civilization:

In the beginning, the Earth was without form, and void.

But the Sun shone upon the sleeping Earth and deep inside the brittle crust massive forces waited to be unleashed.

Into this swirling maelstrom of Fire and Air and Water the first stirrings of Life appeared: tiny organisms, cells, and amoeba, clinging to tiny sheltered habitats.

But the seeds of Life grew, and strengthened, and spread, and diversified, and prospered, and soon every continent and climate teemed with Life.

And with Life came instinct, and specialization, natural selection, Reptiles, Dinosaurs, and Mammals and finally there evolved a species known as Man and there appeared the first faint glimmers of Intelligence.

The fruits of intelligence were many: fire, tools, and weapons, the hunt, farming, and the sharing of food, the family, the village, and the tribe. Now it required but one more ingredient: a great Leader to unite the quarreling tribes to harness the power of the land to build a legacy that would stand the test of time:

The game pulls the introductory text from a text file located in the game's directory, and it is possible to alter the text file to manipulate the game's introduction.

In Civilization IV, the same text, read by Leonard Nimoy, and a very similar animation introduces players to a new game.

The game's interface is similar across its different versions. Most of them require both a keyboard and a mouse to play properly, but MS-DOS version also allows players to choose keyboard-only interface after choosing graphics and sound options.

The interface mainly uses two game displays: the map display and the city display. Any additional information is available via menus. The menus may be integrated into the displays like in DOS version or implemented externally via the OS like in Windows or Macintosh. They can be activated with a mouse or using keyboard shortcuts. The set of menus varies from version to version, but "Orders", "Advisors", "World" and "Civilopedia" are present in all of them.

Map display in the DOS version.

City display in the DOS version.

The DOS and Windows versions distinguish right and left mouse buttons and react to them differently. While the left button is used to perform actions such as unit manipulation or map navigation, the right button is mostly for obtaining information. For example, clicking on a tile with the right mouse button opens a Civilopedia entry about its terrain type.

For the mouse pointer in most versions the game uses a sprite of a torch. Depending on circumstances, the Windows mouse pointer may change into a direction arrow indicating where a unit will move on the map if the mouse is clicked. In the Macintosh version the same effect is replicated using special grey arrow sprites. The Windows pointer also changes into an hour glass when the program is busy. The Amiga and Atari ST versions don't use the torch pointer and instead use simple arrow sprites.

Points of controversy and criticism[]

While the game has been the target of far less criticism than its sister-game Colonization, there are some elements of Civilization that are considered controversial because they lack neutrality.

A topic of critique is the trivialization of historically important, but sensitive, topics such as religion and slavery. The games have managed to handle these aspects in a relatively generic manner.

The assignment of 'traits' to particular leaders has been a source of some criticism. Some have questioned whether the game is simply trying to re-create history instead of allowing a player to imprint their own traits onto the developing game. Others have considered such trait assignments racist, since some of these traits are perceived to be applied to a general group of people instead of specific leaders. The Zulus, for example, are aggressive even when their civilization is hopelessly outmatched.

There is also considerable discussion over the AI used in the game. In order to compensate for its limitations and provide a decent challenge to the human player, it is known that computer players (often referred to collectively as the "AI") are favored with an in-game set of advantages. In particularly glaring undocumented occurrences of these advantages being revealed, players often find themselves in the odd position of playing a game where they don't know the rules.

Some reviewers of the game, such as Amiga Power's Gary Penn, were highly critical of the slow gameplay. On the original Amiga 500 version, the long introduction could not be skipped, and long games could last weeks rather than minutes.

Another contentious aspect of the game occurs in combat when a modern unit is fighting an obsolete or ancient unit. The ancient unit can sometimes win what most players consider to be an impossible battle. The most notorious of this is the infamous "spearman defeats tank" phenomenon in which ancient combat units could defeat modern ones (such as tanks and, amazingly, aircraft) due to status modifiers such as terrain, fortifications, and veteran status combined with the slightly random weighting applied to each combat.

"Veteran players of Civilization were occasionally disconcerted when a veteran phalanx unit fortified behind city walls on a mountain would defeat an attacking battleship. Mathematically it was possible but the image just didn't sit right. How could ancient spearmen destroy a modern steel warship?"

A common way of resolving this phenomenon is to consider the global nature of the Real World. In a world of advanced warfare technology a unit like the "spearmen" represents a poorly organized garrison armed with non-natively produced assault rifles and anti-tank grenade launchers. Likewise, a battleship attacking an ancient tribe could run aground during the manoeuvre, or an artillery unit could misfire, or be subject to a surprise counterattack within the encounter.

The historian and anthropologist Matthew Kapell has published an essay critical of the Civilization series. It suggests that the game uses unique American myths of progress and the frontier in culturally elitist fashion.[4] 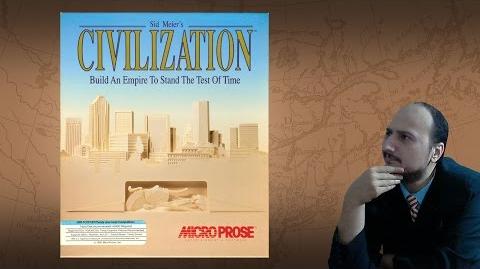