The unique ability and unit of the Songhai provide a strong incentive to play aggressively. The War Canoes and Amphibious promotions will give your military units a distinct advantage on island maps, as they will be able to stand up to enemy naval forces while embarked. The Mandekalu Cavalry, which replaces the Knight, takes less time to produce and does not receive a penalty when attacking cities, making it better suited for sieges in wartime. If you can acquire lots of

Horses, you'll be well-prepared to launch a fast and powerful offensive against your neighbors once you research Chivalry. You can then use the

Gold that you pillage to rapidly develop captured cities, or to purchase new units and maintain your army's momentum.

The Mud Pyramid Mosque can also be a great asset when playing as the Songhai. It costs no upkeep and also generates more

Culture in comparison to the Temple, allowing you to work your way through the social policy trees while simultaneously increasing your

Faith generation. Build it in new cities as quickly as possible to ensure that you will found a religion early on. If you're going for a domination victory, adding beliefs like Just War will make it much easier for your forces to capture enemy cities and city-states that adopt your religion. Be sure to build the Statue of Zeus and adopt all the policies in the Honor tree to further increase your army's prowess and earn additional

Although a domination victory is the most obvious choice for the Songhai, they can potentially pursue a cultural victory or even a diplomatic victory by adding beliefs like Religious Art or Papal Primacy to their religion. If you choose one of the latter options, you should focus on attacking other civilizations and spending the

Gold that you earn by conquering their cities to buy

Influence with city-states. This, in turn, will further boost your

Culture output, allowing you to adopt new policies and impress and befriend other city-states more easily. Depending on the map type and what kind of victory you're trying to win, filling out some combination of the Aesthetics, Patronage, and Piety trees early on will help you along, and completing the Commerce or Exploration tree later on will keep your empire's economy strong.

The Songhai Empire was a civilization that flourished in West Africa during the 15th and 16th centuries. The Songhai first appeared near the city of Gao, which was a vassal of the Malinese Empire. In the early 14th century the Songhai gained independence from the Mali, and over the next two centuries it expanded, eventually becoming the largest empire in African history.

The terrain of western Africa that was occupied by the Songhai is largely flat and arid, dominated by two major river systems, the Niger and Senegal, which provide cheap and rapid east-west transport as well as rich farmland along their banks. The climate is hot and tropical with two main seasons, dry and wet. From March until June a hot, dry wind blows out of the Sahara, and daytime temperatures are often above 100 degrees Fahrenheit.

Before the Songhai: The Mali[]

Before the rise of the Songhai, much of central Western Africa was controlled by the Mali Empire. This empire is believed to have been founded sometime before 1,000 AD. It was largely a trading empire and literally the crossroads of Africa, controlling the important north-south Saharan commercial routes as well as the east-west river routes. Under the great leader Mansa Musa (1307 - 1331?), the Malinese Empire conquered the wealthy cities of Timbuktu and Gao and gained control of the valuable salt deposits to the north.

Mali was a Muslim empire, and under Musa the city of Timbuktu became an important center of learning in the Muslim world. However, by the turn of the 14th century the empire had grown too large for sustainable centralized rule, and major territories began to assert their independence and calve off. This included Gao, the home of the Songhai.

The Rise of Songhai[]

The Songhai are believed to have first appeared in Gao around 800 AD. Little is known about their early history, but it is known that in the 11th century, King Kossoi converted to Islam, and he also made Gao the capital of the growing Songhai kingdom. Under Songhai rule Gao grew wealthy and prosperous, and in the early 13th century the Mali conquered the Songhai, making the kingdom a vassal state. Songhai remained under Mali control for perhaps fifty years, before regaining its independence under King Sulaiman-Mar.

Songhai maintained a precarious freedom for the next century, until a great new leader, Sunni Ali Ber, propelled it into greatness.

Sunni Ali Ber ruled the Songhai for thirty years (1464-1493). He was a brilliant military leader and strategist. Taking advantage of Mali's growing feebleness, Sunni led Songhai armies to conquer the wealthy city of Timbuktu, driving out the marauding Taureg people who had taken over the city as Malinese power declined. He expanded his empire further west, gobbling up all Malinese land north of Jenne (a.k.a., Djenne). He was not unopposed in his expansion. Over the course of his reign he repelled assaults from the Mossi, Dogon, and Fulani.

In 1473 Ali Ber sought the greatest prize, the wealthy trading city of Jenne. Jenne was still a part of the Malinese Empire, and its people put up a stout defense. Unable to take the city by storm Ali Ber laid siege to it. The city held out stubbornly for seven years before capitulating.

The records of the day generally regard Ali Ber as an unstable tyrant, who was by turns generous and brutal, who ruled with an iron fist and who slaughtered and oppressed those he captured. There may be some exaggeration, as the Muslim scholars who recorded the histories disliked Ali Ber for the unorthodox form of Islam he practiced, apparently a kind of fusion between Islam and traditional Songhai religious observances.

Muhammad I Askia ruled Songhai from 1493 until 1528. The word "Askia" means "usurper," which is how he came to power, overthrowing Ali Ber's son and heir less than a year after Ber's death. That he chose "usurper" for his title and dynastic name suggests that this extraordinary man had an extraordinary sense of humor.

Although he fought a war to gain the crown of Songhai, Askia was more than a warlord. He fought several battles during his reign, with mixed success, but he is primarily known as a reformer, organizer, and man of God. During his reign he created a bureaucracy to help rule the empire and to bring coherency to its tax, military, and agricultural policies. He opened many religious schools across Songhai, and in 1495 he made a famous pilgrimage to Mecca.

Askia ruled until 1528, when he was deposed by his son. For more information about this extraordinary ruler, see his Civilopedia entry.

The Decline and Fall of Songhai[]

In the years following Askia's removal, no other leader was able to take and hold power for any significant length of time. Askia's son, Musa reigned for three years; he was followed by Muhammad II, who lasted for six years; and the next two leaders lasted for two and ten years respectively. In 1549 Askia Dawud came to power; he ruled for some thirty-three years, until 1582. This relative stability was shattered when the Sultan of Morocco raided the Songhai's valuable salt deposits at Taghaza.

The end came in 1591. Seeing that the Songhai were weak and divided, and, most of all, lacked modern weaponry, a Moroccan army armed with muskets launched a major attack. The Songhai warriors were completely routed, the leaders driven into the hills and the Moroccans captured the major cities of Timbuktu and Gao. In one shocking campaign, an entire empire was virtually wiped from the planet.

The fall of Songhai was brutal and rapid. In many ways it resembled the conquest of the Aztec Empire some seventy years earlier in 1521. In their day both of these empires were mighty, rich and powerful and thought themselves invulnerable. Both were brought down by a small force armed with markedly superior technology. It reminds us of the famous rule, "Never bring a knife to a gunfight. Bring a gun. Preferably, bring at least two guns." This is as true in empires as it is in gunfights.

According to legend the people of Songhai worshipped a monstrous fish and were subject to its stringent laws, until a stranger who came from the Yemen killed it. He became King of the Songhai and was the founder of the earliest-known dynasty, the Dya.

In response to the threat of encroachment by desert sands, Timbuktu was inscribed on the World Heritage in Danger List in 1990 and UNESCO established a conservation program to safeguard the city.

The Songhai are well known for their woven blankets and mats. The elaborate cotton blankets (terabeba) woven by men in the town of Tera are highly prized.

The strongest taboo in Songhai society is lying. It is only the worst kind of person who will tell a lie. 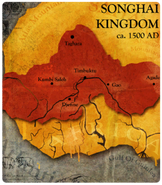