District of the Atomic Era

A district that is required to construct the Science Victory projects.
Cannot be built on Hills.

The Spaceport is a

District in Civilization VI, dedicated to conquering space. It requires discovery of the Rocketry technology and cannot be built on Hills.

Any player aiming for a Science Victory will need at least one Spaceport to undertake the required projects. Launch Earth Satellite must be finished before work on Launch Moon Landing can be started, and Launch Moon Landing must be finished before work on any of the three Martian colony projects can be started. The Martian colony projects can be completed in any order, and each one can be undertaken at a different Spaceport, so having three different cities with Spaceports can greatly expedite the final stages of the Space Race.

The Spaceport is not a specialty

District, so it does not count against the

Population limit of the city.

In Rise and Fall, players with a Royal Society can spend their Builders' charges to contribute

Production to their Spaceports' projects.

Note that an enemy Spy can sabotage a Spaceport via the Disrupt Rocketry espionage mission, leaving it out of action until it can be repaired.

The image of a spaceport (or cosmodrome) as a gateway to the stars is evocative of adventure and discovery, of the next "great frontier" for civilization. The reality is much more prosaic: a place to launch (and maybe eventually land) rockets, much like a seaport for ships or airport for planes. Like those, a spaceport consists of derricks, cranes, administration buildings, control centers, fuel tanks and the working infrastructure. The world's first permanent facility for orbital, manned launches was Baikonur – which had started as a Soviet military test range – in 1955 AD. Spurred by that the United States soon converted the Air Force Missile Test Center at Cape Canaveral to launch sub-orbital and then orbital rocket test flights ... and the space race was on.

Concept art of an unworked Spaceport

Concept art of a Spaceport progressing through the different space projects 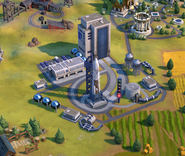