Gold bonus for discovering a Natural Wonder (bonus enhanced if first to discover it).

Wikipedia has a page called:
Spain

The Spanish people represent a DLC civilization for Civilization V that was released in December 2010 along with the Inca and the Conquest of the New World scenario. They were included again in Civilization V: Gods & Kings.

The Spanish are the masters of exploration. They receive 100

Gold bonus for discovering a natural wonder, which goes up to a whopping 500

Gold if they were the first to discover it, creating an advantage for the early game. Spain also gets double

Happiness for discovering a natural wonder. Furthermore, the tile yields from natural wonders are doubled, which makes them very potent early sources of

Gold - yet another great advantage in the early game. Finally, the bonuses from the One with Nature pantheon and the Natural Heritage Sites resolution are doubled as well, allowing the Spanish to reap some of the benefits of their discoveries in the later eras.

Later in the game they gain access to the Conquistador - arguably the best scouting unit in the game - which can not only see far and move rapidly on land, but is also capable of settling cities on islands or other continents! Research Astronomy ASAP and send them across the seas to literally conquer the New World - first scouting it, then immediately settling cities in the locations left unsettled by the other civilizations.

To use best the advantages of this civilization, produce 2-3 Scouts immediately after founding your

Capital, then send them in search of natural wonders. If there are any near your starting location, settle cities near them immediately to take advantage of their exceptional output, not found normally on the land.

Spain's location on the Iberian Peninsula between North Africa and Europe has made it an important territory from prehistoric times to the present. At one time the first world Imperial power, Spain later had to survive devastating wars and centuries of political unrest. From its discovery and colonization of the New World to its involvement in countless wars of independence, Spain is one of the few countries which can claim such a lasting and encompassing global influence.

The Kingdom of Spain is the 51st largest country in the world, only some 31,000 square miles bigger than the state of California. The majority of the country is dominated by high plateaus and mountain ranges, including the Sierra Nevada in the south and the Pyrenees to the west. Spain's highest peak is located on one of its island holdings, the volcano Teide on Tenerife, a member of the Canary Islands.

Spain's climate is incredibly diverse, even if only considering the mainland and none of the colonies. The southern areas bordering the Mediterranean Sea enjoy a mild Mediterranean and semi-arid climate, the central plain is Continental in nature, and the northern areas vary between Oceanic and Mountainous temperatures. Also, contrary to popular belief, the rain in Spain does not fall mainly in the plain - it's usually found in the mountains.

Early History: From Cro-Magnons to Celts[]

Archeological evidence suggests that humans first arrived on the Iberian Peninsula about 32,000 years ago, the Altamira cave paintings providing a famous artifact of their travels. The peninsula was settled between two main groups, the Iberians and the Celts, the former populating the southern and eastern areas with the latter inhabiting the northern and western stretches. The peninsula placed the Celts and Iberians in a prime position for commerce, and many Phoenician and Greek merchants set up a thriving gold and silver trade, predominately within the city of Tartessos, located at present-day Seville. A few Phoenician, Greek, and Carthaginian trading colonies were founded along the Mediterranean coast of the peninsula, though the local populace retained control over most of their area, despite this influx of foreign gold and power.

This continued until roughly 210 BC, when the Romans captured the Carthaginian colonies during the Second Punic War. At this point, the Romans launched a campaign into the heart of the Iberian Peninsula, where they conquered nearly all of the landmass. Over the course of the next 500 years, the Celts and Iberians were steadily "Romanized" - local aristocratic families were inducted into the Roman nobility, Roman roads and trading posts dotted the land, and new systems of irrigation techniques were established, including the famous aqueducts. Christianity was also introduced during this time and was quickly adopted by the local people.

Rome, however, began to lose hold of the peninsula (now being referred to as "Hispania" or "Iberia") when a Germanic invasion of Gaul pushed Suevi and Vandal peoples into Iberia in 409 AD. The displaced tribes set up a new kingdom in modern day Galicia and Portugal, and Rome lacked the resources to stop them. The Vandals quickly spread across Iberia, leaving the Romans with a small southern holding along the coast, Spania. The Byzantine Romans hoped to retake Iberia from this vantage point, but soon the entire peninsula fell under Visigothic rule.

The Arrival of the Moors[]

The Visigoths continued their control of Iberia for the next three centuries, until a sudden invasion by the Umayyad Islamic Empire swept across the peninsula. The large, Moorish armies crossed from North Africa into Gibraltar and conquered nearly the whole of Iberia in seven short years, from 711-718 AD. The new Islamic powers allowed the Christians and the Jews to continue their religious practices, but did require them to pay special taxes and submit to a few discriminatory practices. Despite these minor (for the given time) prejudices, many of the locals began to convert to Islam.

The invaders themselves were hardly unified despite their shared religion and purpose, and soon groups of Moors were splitting off and forming settlements of their own, primarily in the Valencia and Granada regions. In the 11th century the Muslim territories fractured again, allowing some of the remaining Christian kingdoms to expand their boundaries. Christians and Muslims continued to wrest for control of Iberia for centuries, resulting in the creation of the Reconquista.

The Reconquista, Unification, and Inquistition, Oh My[]

Officially starting with the Battle of Covadonga in 722 (but not gaining momentum until much later), the Reconquista was the name given to the Christians' attempt to reclaim Iberia from Muslim rule. Many important Christian kingdoms were founded by the Reconquista, such as Asturias and Aragon, but most of the Muslim kingdoms stubbornly held onto their land. For the next 700 years, a battle for the Iberian Peninsula raged between the Christians and the Muslims: strongholds were built and fell, power bases and balances shifted, and borders were redrawn on nearly a yearly basis. Despite the slow encroachment of the Christian-led kingdoms across Iberia, no clear victor presented itself.

However, this all changed with the fateful union of the kingdoms of Castile and Aragon, joined by the marriage of Isabella I and Ferdinand II in 1469. The two monarchs led a pointed attack against the Islamic stronghold of Granada, and in 1492 they finally ended the 781-year rule of the Muslims in Iberia.

1492 was an important year for the monarchs; Christopher Columbus, with the patronage of Isabella, arrived in America (leading to the colonization of the New World), and the Iberian Jews were ordered to convert to Christianity or face expulsion or even death under the Inquisition.

The new, unified kingdom of Isabella and Ferdinand became known as España (or Spain) and with her wealthy colonies in the New World became the first "world power" of the time.

At its height, the Spanish Empire counted holdings across the entirety of the world - from large chunks of North and South America and small pieces of Europe, to various cities in North Africa and the entirety of the East Indies. The Spanish led the world in this age of discovery, accumulating vast amounts of wealth and trade from their numerous colonies and principalities. It was said, and rightfully so, that the sun always shone somewhere in the Spanish Empire.

Spain's new trade routes with the New World not only provided new knowledge and culture, but also new resources in the form of precious metals ( i.e., gold), spices, and plants. Spain's Golden Age also saw the creation of intellectual and spiritual reforms as well, starting with the escalation of humanism, beginnings of the Protestant Reformation, and the founding of the School of Salamanca.

Troubles and Warfare, or, Spain can't get a break[]

With great power comes great responsibility, at least if you don't want Barbary pirates to conduct slave raids along your empire's coastal holdings. Besides the growing pirate and Ottoman threat, Spain found itself routinely at war with France. Religious unrest and wars shook the Catholic empire, as the Protestant Reformation dragged the empire into ever-increasing military engagements across Europe. What unrest and religion didn't touch, plague did, and in the 1650's, the empire was rocked by the Great Plague of Seville.

From this point forward, Spain's power and influence went into a gradual, and then not-so-gradual decline. She began to lose her European holdings, primarily from the separation of Portugal and the Netherlands, and then suffered military setbacks from the highly destructive Thirty Years War.

Wars and more wars threatened and decimated the once proud empire for the next two centuries. In the 18th century, Napoleon Bonaparte invaded the country by trickery, claiming he was on his way to Portugal. Then in the early 19th century, a nationalist revolt to overthrow their French- occupationalist government led to the Spanish War of Independence, or the Peninsular War. Despite their eventual victory over the French (mostly due to Napoleon's disastrous Russian campaign) the country was thrown into political turmoil.

Spain soon saw itself in turn facing multiple wars of independence from its own foreign colonies, cumulating in the Spanish-American War. The 20th century didn't bring much change for the fallen empire - The Spanish Civil War of the 1930s brought Fascism and an authoritarian government to the country, claiming over half a million lives in the process. This war is also commonly credited as the first battle of World War II.

It wasn't until the death of General Francisco Franco, in 1975, that the monarchy was restored and things began to look up for Spain for the first time in the past 300 years.

The Present and the Future[]

In 1978, Democracy was introduced to Spain with the approval of the Spanish Constitution; King Juan Carlos finally put a stop to rebel and radical Nationalist movements that had been rampaging across the country side, primarily led by a group of Basque terrorists. In 1982, Spain became a member of NATO, and then in 1986, a member of the European Community, which later became the European Union.

From its glorious days as an Imperial power to its centuries of internal and international strife, Spain has rebuilt itself and re-emerged as a new world player, boasting the ninth largest economy and tenth highest quality of life in the world. A huge percentage of the world can trace back some part of its national identity or culture to Spain, from the architectural iron workings in New Orleans to the Catholic faith of the Philippines. Few current nations can claim to have such a far-reaching and lasting influence as Imperial Spain, both at the height of her power and today.

One of Imperial Spain's most recognizable legacies is its language - nearly 500 million people today speak Spanish, the second most popular language in the world.

Spain is the leading nation in solar power production, having overtaking the United States in 2010 with the completion of La Florida, a huge solar plant. Also, more than 50% of the energy generated in the country is provided by windmills, much to Don Quixote's displeasure.

In theory, if not in practice, nudism is legal everywhere throughout Spain.

The beret was invented in Spain by the Basque in the northeast Pyrenees. 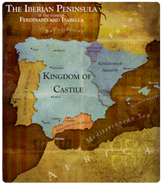