Recon unit of the Atomic Era

Atomic Era reconnaissance unit. Paradrop ability allows movement from friendly tile to location 7 tiles away (12 if starting from Aerodrome or Airstrip). Can attack support units directly without having to eliminate the combat unit first.


The Spec Ops is an Atomic Era recon unit in Civilization VI: Rise and Fall. It upgrades from the Ranger (or its replacements).

It is not surprising that the Spec Ops' primary function is not reconnaissance anymore, due to the minimal need for scouting in the Atomic Era. Rather, its awesome maneuverability and a powerful ranged attack make it ideal for engaging in guerrilla warfare. Moreover, its ability to directly attack support units in a formation makes it a great counter to Supply Convoys and siege units with Drone support. It's a good idea to keep at least one Spec Ops around for defense in the final eras of the game. Don't be overaggressive with this unit though, as its

Ranged Strength are on the lower end of the units in this era.

Some military problems carry severe risk of failure if resolved with purely military solutions—sensitive political fallout, extreme weather conditions/environmental hazards, or an outraged and resistant local populace. Special ops (short for “special operations”) are soldiers uniquely trained to handle these difficult situations, ranging from combat and reconnaissance to political or civil affairs. They rely on superior skill, tactics, and equipment to complete jobs that would otherwise be impossible for larger units, training in foreign languages and customs of their operational theaters. Their strength lies in their creative approach to engaging an enemy and their capacity to act without hesitation, no matter how unconventional or dangerous a situation may be. 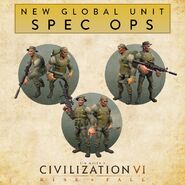 Everything we know about Civilization 6: Rise and Fall - PC Gamer, November 28th 2017