Culture if built on Floodplains
+1 (

Faith if next to a Wonder
+1

Wikipedia has a page called:
Sphinx

The Sphinx is a unique tile improvement of the Egyptian civilization in Civilization VI. It can be built on any land tile, including Floodplains.

The Sphinx has some of the least restrictive placement requirements of any improvement - any passable land tile is fair game, except for Snow and Snow Hills in Gathering Storm. The Egyptians should build them on tiles that cannot support other improvements, or adjacent to wonders for some extra

Faith. Thanks to their Appeal bonus, well-placed Sphinxes can create good spots for Seaside Resorts and National Parks, or increase the yields of those that are already there.

Before Gathering Storm, the Sphinx grants +1 Appeal to adjacent tiles, but with Gathering Storm, it grants +2 Appeal, which is equivalent to a Natural Wonder other than Uluru or the Appeal amount granted by the Eiffel Tower, a Modern Era Wonder! And you can put this almost everywhere in your empire! Since Appeal is not a yield you can see on the map without its special lens, it tends to be underrated by players. The best Pantheon for Egypt, therefore, is Earth Goddess, since it is never easier to get Breathtaking tiles everywhere. Since Appeal bonus stacks, if a tile is adjacent to 2 Sphinxes, it will receive +4 Appeal. This Pantheon will generate a huge amount of

Faith early on as well as into mid and late game that will help you with any Victory type you choose.

In contrast to the Greek version, the Egyptian sphinx has a human head on a lion’s body, is benevolent, and is the guardian of temples and tombs. Perhaps the first Egyptian sphinx constructed was during the Fourth Dynasty (c. 2500 BC) that depicted the face of Queen Hetepheres II, daughter of famed Khufu. But the sphinx was a common motif among those eternity-obsessed pharaohs; other famous ones include that depicting Hatshepsut and the “alabaster sphinx” of Memphis. Then there is that “Great Sphinx” at Giza that bears the likeness of the pharaoh Khafra (who is otherwise historically insignificant). Smaller ones lined the approaches to tombs and temples, and any number were put at the top of stairways in palaces and public places. By the 18th Dynasty, one could hardly swing a cat in Egypt without hitting a sphinx. 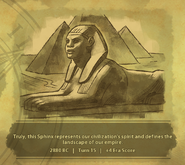 Historic Moment for building the Sphinx