The Stave Church is a unique building of the Norwegian civilization in Civilization VI. It is built in the Holy Site district and replaces the Temple.

The Stave Church has two main bonuses over the standard Temple: first, it raises Holy Site's adjacency bonus from Woods from 0.5 to 1.5

Production to every Coastal resource. Out of these two bonuses, the second one is much more important, since overall,

Production is always the most valuable yield in the game, so make sure you build Holy Sites in every single coastal city you have in your empire. If you are playing as religious Norwegians, the

Faith bonus presents an interesting trade-off. Holy Sites mainly gain adjacency bonuses from Mountains and Woods (they technically can gain major bonuses from Natural Wonders as well, but tiles next to Natural Wonders often have really high yields or high Appeal that you do not want to build a district on it and save it for later National Parks, Neighborhoods or Seaside Resorts). Mountains give standard adjacency bonus and Woods give minor bonus. By the virtue of the Stave Church you would want to prioritize Woods over Mountains, meaning you have to push back your early

Faith out of this building. Considering a Religious Victory has a more narrow time window than other Victory conditions, this might not be the most ideal. However, it gives you a bit more flexibility than other empires, since now you can save your Mountains for your Campuses and Woods for your Holy Sites. It has great synergy with the God of the Sea Pantheon and Auckland city-state, so aim for these two targets and all of your coastal cities will turn into bustling industrial hubs.

The ability to consistently get an extremely high faith adjacency bonus means that the Work Ethic follower belief should be a high priority. This adjacency bonus can be further bolstered if you have some Holy Sites in the arctic regions and the Dance of the Aurora pantheon. A Holy Site surrounded by Tundra Woods, combined with Dance of the Aurora, the Stave Church, Work Ethics, the

Great Scientist Hildegard of Bingen, and the Scripture policy card can help one of your Holy Site generate an absurd amount of

Production very early into the game.

After they got past their pagan ways, stave churches were wooden, post-and-beam constructions built throughout medieval Scandinavia once the Vikings converted to Christianity. In Sweden alone it is estimated that over a thousand stave churches were scattered about, the oldest dating back to the mid-1100s. Besides their religious function, these often served as meeting halls, cultural centers, courthouses, and even as marketplaces. Early stave churches were palisade constructions, with steeply pitched roofs to shed the heavy snows. The churches had elaborate wooden carvings, usually Christian in design but occasionally depicting pre-Christian heroes and myths. Later, only the corner posts were set in the earth, with planking covering the frame. Currently 30 stave churches remain standing, all but two in Norway. 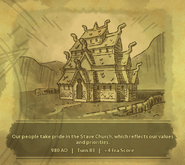