Faith if adjacent to a Holy Site
+1

Food if adjacent to a Farm
+1

Wikipedia has a page called:
Stepwell

The Stepwell is a unique tile improvement of the Indian civilization in Civilization VI. It must be built on a flat land tile

The Stepwell is an underwhelming tile improvement, as it directly competes for space against Farms, and in most cases, can be replaced with Farms for better

Stepwells are encouraged to be built next to a Farm and a Holy Site. A yield of +2

Housing is a strong yield in the Ancient Era, when they first become available. Even with just Farm adjacency, +2

Inspiration for Feudalism. Feudalism only unlocks two eras after the Stepwell, making any investment into Stepwells inefficient. Not to mention, the yields of each Stepwell do not stack when it is adjacent to multiple Farms and Holy Sites. This is the reason why, most of the time, Stepwell feels clunky as if it is actively interfering with your triangular Farm placement. And since Stepwells cannot be placed next to one another, the total yields you can get if focusing on building Stepwells in one city, in terms of both

Housing, are always less than just focusing on building Farms.

There are 3 other unique improvements that grant 1

Housing right from the get-go: Kampung, Terrace Farm and Mekewap. All of these improvements are among the most powerful improvements in the entire game, and the reason for this is each of these improvements bring something so different that it cannot be replaced by any standard improvement in the game. They either have a unique placement restriction that allows the civilization to take advantage of certain terrains before other civilizations can (Kampung, Terrace Farm), or grant a huge amount of yields that scale well (Mekewap's

Production on top of

Faith, but in an amount so small it doesn't make a difference. With Feudalism, each Stepwell grants 1

Faith, with an additional

Faith if placed next to a Holy Site. For comparison, each Khmer Farm grants 1

Faith if placed next to a Holy Site, and of course, Farms can be built next to one another while Stepwells cannot. All in all, what the Stepwell critically lacks is an identity, as it is very hard to answer the question of why you should build Stepwells when you can just build Farms instead. It is true that a Stepwell requires less space for more

Housing than a Farm, but extra

Food to grow your cities is meaningless.

Despite its shortcomings, there are a few situations where Stepwells should be considered, since they can be built in terrains where Farms cannot be built, namely Desert, Tundra or Snow. They also make expansion into these biomes more feasible, especially when you are considering building the respective wonders for those biomes, Petra, St. Basil's Cathedral and Amundsen-Scott Research Station. Also, since this is a unique improvement, Stepwells built outside the 3-tile workable range still provides extra

Housing when Farms do not, so that is another niche that Stepwells can fill in. Also, one early Stepwell and Varu can push India to a Golden Classical Era. Gandhi can pick Exodus of the Evangelists to found and spread his religion, while Chandragupta can make good use of the extra Loyalty pressure when he begins with conquest with the Varu.

A “stepwell” is a well or pool that can be reached by a set of steps. Although found in other regions, stepwells (known by a variety of names) are prevalent in India and Southeast Asia. The first rock-cut stepwells in India date from around 200 BC, and by 600 AD they were common throughout the Gujarat region; scholars believe that “cylindrical brick-lined wells” were a product of the early Bronze Age Indus Valley civilization. Many of the ancient Indian settlements had stepwells, and the elaborate ornamentation – some as detailed as those of any Hindu temple – show they were highly thought of by the citizenry. Not surprising, given the scarcity of clean water in the area. Alas, the British overseers of the Raj found the hygiene of the wells less than desirable, and so installed pumps and pipes to replace the stepwells in their holdings. Far less picturesque, but certainly more efficient. 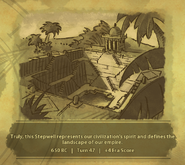 Historic Moment for building the Stepwell
Community content is available under CC-BY-SA unless otherwise noted.
Advertisement