Allows the city to start the Carnival city project, which turns

The Street Carnival is a unique

District of the Brazilian civilization in Civilization VI. It replaces the Entertainment Complex.

The following buildings can be constructed in a Street Carnival:

While it may at first appear to be very underwhelming, the Street Carnival is actually an incredibly versatile district that can keep up with a city's need for

Amenity needs taken care of for a long time. If you come to think of it, it is a four times more effective entertainment complex, since it has half the cost and double amenities.

Amenities from Luxury Resources to be given out to other cities that may need them more. The Carnival Project earns

Great Musician points upon completion. The

Great Musician points given are the same as if one had gained them through Theater Square Performances; and

Great Merchant points are half as much given if one had gained them through Industrial Zone Projects or Commercial Hub Investments. This makes it completely eclipse the Theater Square project, which becomes redundant for anything other than gaining

Note that since Rise and Fall the Street Carnival gives access to two different projects, which makes it even more versatile. You can easily implement the Loyalty push strategy with it, because it is much cheaper to build than a normal Entertainment Complex, and Brazil would really benefit from it anyway.

Many cities have street carnivals – especially during the Christian season of Lent – but only Brazilians really know how to cast care to the wind during such festivals. Parades, concerts, performances, masques, and public banquets (along with liberal amounts of alcohol) fuel the celebrations. According to stuffy postmodern sociologists, Carnival as a social institution provides more than just a respite from the seriousness of urban life, it serves as a release for natural impulses that threaten the social order and allows marginalized groups to focus attention on social conflicts by embodying them in "senseless" activities. Whatever the truth of this interpretation, Rio de Janeiro's is the world's largest street carnival, hosting upwards of two million participants a day in recent years. 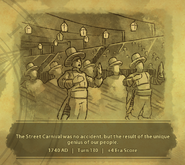