Trade Routes from this city gain +2

Trade Routes from this city gain +4

The Sukiennice is a unique building of the Polish civilization in Civilization VI. It is built in the Commercial Hub district and replaces the Market.

Regardless of whether you plan on playing more offensively or defensively, you should develop Polish cities for commerce. Build Commercial Hubs in every possible city, then fill them with Sukiennice to enjoy the extra

Gold (from domestic trade) and

Production (from foreign trade). Be sure to augment your

Trade Routes via policy cards to provide further boosts. Some, like Triangular Trade, are good for both types of routes, while Market Economy only impacts international routes. If you're aiming for a Culture Victory, international trade will speed you along by further increasing your

Tourism output. In Gathering Storm, the University of Sankore has good synergy with this building, making domestic

Trade Routes even more powerful for Poland. Strive for other ways to increase

Trade Routes via World Congress resolutions, being a Merchant Republic, or other Wonders to get the most out of the Sukiennice.

This is a great building, since every strong empire requires a strong network of

Trade Routes, so Commercial Hubs and Markets are a must every game. With the Sukiennice, you do not have to think too much about whether or not you should send domestic or international

Trade Routes, as you will have the best of both worlds with extra

Production it supplies. It is recommended for the early game to have domestic

Trade Routes originate in new cities to boost their growth. The extra 3

Gold for every domestic

Trade Route completely nullifies the economic downside of this strategy. Also, try to at least get 4 Envoys at all the Commercial City-States to get the most out of the Sukiennice.

Thanks to its location between Europe and Russia, Poland’s cities were vibrant with trade, as exemplified by the cloth halls (known as sukiennice in Polish) located in the great cities of the realm. It contained trading stalls, where vendors sold cloth, leather goods, wax, salt, peppers, spices, and silk from the Far East, indeed all sorts of exports and imports. Usually built in the center of towns, these were international marketplaces, larger and more magnificent than the run-of-the-mill markets scattered about Europe. In the halls and porticos, traders from dozens of lands made deals, and the locals—those who could afford it—found all the luxuries they could desire. In Poland, the oldest and largest was the Sukiennice of Krakow, rebuilt in the Renaissance style in 1555 AD after a fire. It was an important center for international trade between West and East until the end of the 16th Century (today its stalls sell snacks and souvenirs to tourists). But the cloth hall was also vital in other Polish cities, doing a booming trade in places such as Poznan, Wroclaw, and Torun. 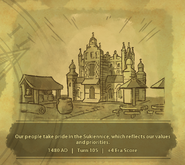 Historic Moment for building the Sukiennice
Community content is available under CC-BY-SA unless otherwise noted.
Advertisement