Support unit of the Modern Era

Movement if move is started adjacent to the Convoy.


The Supply Convoy is an Modern Era support unit in Civilization VI: Rise and Fall. It upgrades from the Medic.

In contrast to the Medic, the Supply Convoy is faster and can be used for both offensive and defensive purposes. Put it in the middle of a friendly force, and they'll all receive a

Movement bonus at the start of their turn, allowing them to push deeper into enemy territory. Once they get into the thick of the action, have the Supply Convoy hang back and move damaged units next to it so they can heal up and be ready to rejoin the battle sooner. Supply Convoys are particularly effective when linked to siege units (which they will enable to attack after moving even without the Expert Crew

Promotion) and light cavalry units with the Escort Mobility

Promotion (which will allow them to move efficiently and safely at the same time while also providing a constant speed boost to the cavalry unit).

With the advent of mechanized infantry, logistics grew increasingly complex. A motorized army can only travel as far as its fuel provides, which is why support convoys became the lifeblood of modern warfare. Motorized transports could bear food, fuel, and medical supplies with more reliability and efficiency than carts drawn by beasts of burden. They also allowed for faster relocation of mobile field hospitals or fuel depots when operating near a more fluid front. 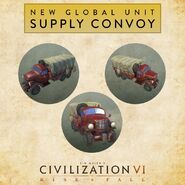 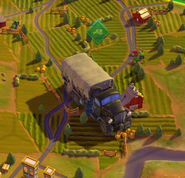