The Tagma is a unique heavy cavalry unit of the Byzantine civilization (when led by Basil II) in Civilization VI. It replaces the Knight and is unlocked with Divine Right.

In the Gathering Storm expansion, the Tagma's

Gold purchasing cost is increased from 720 to 880, and its

Gold maintenance cost is increased from 3 to 4. It upgrades to a Cuirassier, and requires 10

The Tagma is a decent unique unit, neither weak nor outstanding. The only difference it has compared to the standard Knight is that it grants nearby military units and religious units 4 extra

Religious Strength. Note that this bonus does not stack when a unit stands next to multiple Tagmata, nor does a Tagma give it to itself. It slightly helps Byzantium in conquest and religious conversion, as their units will almost always have an edge in battle. Overall, the Tagma's true strength lies in the fact that Byzantium can print out free heavy cavalry units extremely rapidly with the Hippodrome, and they are further assisted by Basil II's and Byzantium's ability, so they are not a strong unit in themselves, but are very well supported by the rest of their civilization's toolkit. Even if Basil II did not have the Tagma as his unique unit, the standard Knight could still do the job well enough, so the Tagma is more like a cherry on top than a key to Byzantine power.

In conjunction with Basil II's ability, the Tagma allows you to pretty much ignore the bottom half of the tech tree in the Medieval and Renaissance Era for a quite a while, since these technologies focus on unlocking siege, melee, and ranged units, which you do not need. You can rush for technologies that improve your empire's

Production output like Industrialization, and then go back to the technologies at the bottom later to unlock the Cuirassier (in Gathering Storm).

The tagma – plural: tagmata – were the Byzantine descendants of the Roman imperial guard. At first, the tagmata were noble young men who sought positions where they could be personally close to the Emperor and perhaps gain his attention. But over time, the imperial guard became more of a social space than a fighting force and, in the 8th century, the Emperor Constantine V sought to reorganize them into a mobile, rapid-response force: the tagma. Tagma units were continually updated and refined, and later emperors brought new inventions in heavy cavalry into the force. The guard grew so successful that, under Basil II, the tagma system expanded to include not just knights in Constantinople, but provincial units and foreigners. These also involved the feared Varangian Guard – Viking mercenaries in the direct employ of the Byzantine Emperor. 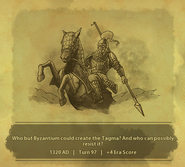