The Tech Web is a feature in Civilization: Beyond Earth, which represents the possibilities for technological development of your colony. Unlike previous Civilization games which featured linear tech trees, the tech web branches off radially in several directions. Higher tier techs again require lower tier techs to be developed first, but because of the web - style of organization, even the most sophisticated technologies are accessible after you develop only 5 - 6 lesser technologies. 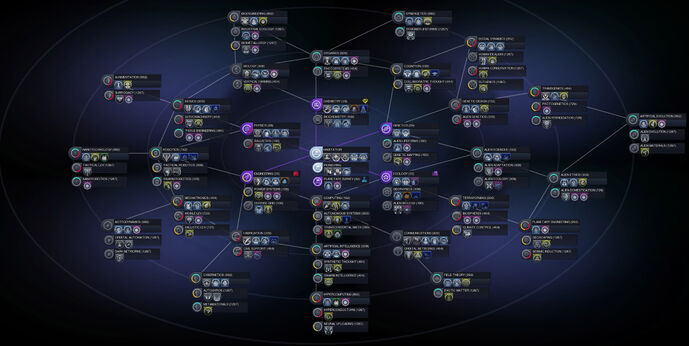 In Civilization Beyond Earth the technologies are divided in two types:

In Civilization V, icons in each technology node are ordered from left to right: Units, City Buildings, Wonders, Revealed Resources, Tile Improvements, Abilities, Projects. Beyond Earth appears to preserve this order, with the addition of a +Affinity Points type, which appears to the left of Units.

Unit icons are monochromatic and borderless. Building icons have an octagonal border, and Wonder icons have a crescent border. Abilities appear as a star in a circle. Resource icons appear in color in a dark circle. Tile improvements appear borderless, but have a deeper color shade than units.

This illustrator will give you a good overview of the Tech Web: http://apolyton.net/civbe/techweb/