Food for each adjacent Mountain
+2

Production for each adjacent Aqueduct
+1

Production if adjacent to fresh water and not an Aqueduct

Wikipedia has a page called:
Andén

The Terrace Farm is a unique tile improvement of the Incan civilization in Civilization VI: Gathering Storm. It is available without any technological research and must be built on Grassland Hills, Plains Hills, Desert Hills or Volcanic Soil tiles.

The entire Inca empire mounts on the shoulders of this improvement - without the Terrace Farms, the Inca have very little going for them. Terrace Farms, if employed correctly, can give an enormous early game boost to the Inca player. They will significantly boost

Production, the two yields that are required for every prosperous empire.

Make sure to place your Terrace Farms next to Mountains and, if possible, Rivers, Lakes, or Aqueducts to gain the greatest

Production yields possible. This will give you both populous and productive cities, and many Terrace Farms will provide you with

Housing to support the enormous

Population that your cities might have if situated near Mountains. Don't forget that each Terrace Farm will also improve the yields of the adjacent mountain tile. Since Terrace Farms are the engine of the Incan empire, all Hills tiles next to Mountains should be reserved for them,

Districts that gain adjacencies from Mountains (Campuses, Holy Sites, also Theater Squares, Industrial Zones and Commercial Hubs if you have Machu Picchu) should only be built on flat tiles.

Without Mountains, Fresh Water or Aqueducts, Terrace Farms are just basically regular Farms (with twice the

Housing) on Hills that you can build from the beginning of the game instead of after researching Civil Engineering, which is handy but nothing too extraordinary. Since you cannot control the map generation of Mountains, you should rely on placing Terrace Farms next to Aqueducts, which will give you a large amount of

Production. Considering you are playing as the Inca under Pachacuti, his leader ability will guarantee your empire will never starve for

Food, and since your

Housing is only slightly better than a regular civilization if you own a lot of Hills, it is more beneficial in the long run to focus on maximizing the

Production output of Terrace Farms. When settling, your City Center should allow a good Aqueduct spot, which, ideally, should be totally surrounded by Hills that can be improved with a Terrace Farm later. If there is a flat tile next to your Aqueduct, reserve it for a future Industrial Zone. Aqueducts are so important to the Inca that every city should get one, since your empire will definitely run into

Housing problems with your massive

Food influx, and also Engineering is a prerequisite technology for Machinery, the technology that unlocks the Warak'aq, so it is not like you have to go out of your way to build these Aqueducts anyway.

A less prominent feature of the Terrace Farm that the regular Farm does not have is that Terrace Farms can be built on Desert (Hills), which allows Inca to thrive in hilly Desert areas. If you spot a Desert area that has a lot of Hills, you can send over a Settler to establish a city there, improve all the Hills to grow the city as quickly as possible and then try to rush for Petra. Thanks to the fact that an Incan Desert city can grow incredibly quickly if there are enough Hills, the construction of Petra is a lot smoother than other civilizations.

Inspiration for Feudalism (either alone or in combination with normal Farms).

Lastly, each mountain tile adjacent to a Terrace Farm will get +1

Food, along with the inherent ability of the Inca to get +2

Production from mountains. This works great with Earth Goddess, allowing your mountains to provide great yields throughout the game.

The Incan terrace farm is one of the most sophisticated engineering works and agricultural systems developed in South America, and one whose complexities and benefits have only recently come into fuller appreciation. The Inca created arable land in a dry mountain region, capable of supporting a variety of crops and animals, and linked together to make optimal use of scarce resources and microclimate variations.

Terrace farms have extensive irrigation canals and cisterns to move water to needed locations. The terraces provide level ground to grow crops, and the stone walls help preserve the day's heat and transfer it back to the soil at night, which mitigates crop freezing. Higher elevations were used as pastoral land for the llamas and alpacas, and different crops planted at different elevations, with the hardier crops like potatoes being raised higher. Each terrace was well-drained, and the water would flow down to help irrigate the terrace below. Lower terraces could be used to raise beans, peppers, and various gourds. The system of terrace farming produced enough surplus food that the Incas created and maintained caches of food for times of drought or disaster.

In recent years, archaeologists and indigenous Andean communities have begun work to understand the terrace farms in the context of this agricultural system. They are rehabilitating some terraces and reintroducing some of the terrace farming techniques their Incan ancestors pioneered in order to feed a growing South American population. 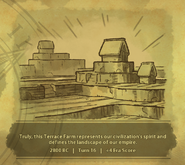