Wikipedia has a page called:
Citadel

The Thành is a unique

District of the Vietnamese civilization in Civilization VI. It replaces the Encampment.

The following buildings can be constructed in a Thành:

The Thành is an incredible

District, it is so powerful and unique that it completely repurposes the original Encampment, and it breathes a new life into somewhat of a forsaken specialty

District slot. No matter which Victory you are pursuing, there is no situation in which building Encampments in every city is a good strategy. The most bloodthirsty warmongers, including the Zulu with their Ikanda, do not need the defensive capability of the Encampment, and civilizations who do not pursue a Domination Victory always have higher priorities in other

Districts, which, all in all, leaves the Encampment in a bad position: no one can benefit completely off of every aspect of this

District when it is taking up space of other more influential

Districts. The Vietnamese Thành eliminates this completely. First and foremost, the Thành does not require

Population, which means it can be placed down in every city without normal repercussions. Even before taking into account the massive

Tourism generated by a good Thành placement, just this change alone turns the Encampment on its head and reshapes the way it should be played with. Vietnam is a Domination/Cultural civilization, and just the sheer number of Thành can give them an unbreakable multilayered shield for defense, and with some buildings inside the

District, a good flow of

Great General points for offense. Enemies who are foolish enough to invade Vietnam will get bombarded from all sides by multiple Thành, while having to crawl painfully slowly through rough terrains.

The Thành also serves another crucial purpose for Vietnam: being the

Tourism generator for the civilization. It gains a major adjacency bonus for every

District nearby, so it is natural that you would want to turn the Thành into a mini City Center and surround it with

Districts. One notable placement rule to keep in mind is that similar to the Encampment it replaces, Thành cannot be placed next to City Centers, so you will not get an easy +2

Culture without having to dedicate

Theoretically, a Thành can reach a maximum of 12

Culture, but this is easier said than done. Vietnam, with their tier 1 starting bias with Woods and Rainforests, is prone to receive strategic, and especially luxury resources, on these tiles, not to mention their unique ability limits where specialty

Districts can go. Even with Medieval Faires, there are tiles that Woods cannot be planted on, like Desert, Snow and Floodplains, effectively further restricting the type of

Districts that can go on those tiles to non-specialty only. The strength of the Thành is that it can be placed in any city, for it does not require

Population, so there is no need to bend over backward to reach this maximum number.

Speaking of the all-important Medieval Faires civic, the Thành is a crucial player in helping Vietnam reach that feat with a respectable timing. As mentioned above, although the Thành is so different from the Encampment it replaces, most players still tend to forget about it when they finish researching Bronze Working, since the Encampment has never been a priority so high that it has to be placed down immediately after unlocking. The Thành for Vietnam, however, is such a priority. The

Culture Vietnam gains from having buildings on Woods is pathetic, that "bonus" is a flytrap more than anything. The cheapest building that can leverage that bonus is the Shrine (70

Production), while your unique

District has the base cost of 27

Production, even after the scaling due to civic and technology progression, the ratio of

Culture is still heavily in favor of the Thành. In the first two eras, all your cities should have a Thành, a Campus and a third specialty

District in a triangle (this

District can be a Holy Site for a Cultural game, or a Commercial Hub for a Domination game). By the virtue of this, you will have a good

Culture flow to beeline Machinery and Medieval Faires simultaneously. This can easily be achieved, since all you need to do is to find two tiles with features next to one another, and place the Thành adjacent to both. A Thành is not a specialty

District, so it is not subjected to the feature-only placement rule, which also means a Thành will clear out the feature on its tile when get placed down.

After the April 2021 Update, the Thành was nerfed so that it no longer provides 1

Great General point. However, considering how important the extra

Movement provided by the

Great General is to your Voi Chiến timing push, being able to get at least 1

Great General before Medieval Era hits is still a must. There are a couple of ways you can do this. The least efficient way to generate

Great General points is to build more Barracks. You still need at least 1 Barracks in the early game to boost the experience gained by your Archers/Voi Chiến, but building any more Barracks than that feels like a waste, since this building is as expensive as a Library, doesn't give you anything more than just the

Great General point, and it doesn't benefit from the Vietnamese civilization ability, since the Thành is not a specialty

District. The better ways to do this are either to run the Strategos policy card (you have to sacrifice a

Wildcard policy slot for this), or to complete one or two Encampment Training projects, which is more efficient in terms of

Production spent, and you will get some

Gold back that can be used to upgrade your units later. If you insist on building a few Barracks, make sure you research Military Training civic to unlock the Veterancy policy card. The

Inspiration for this civic is to build an Encampment, which is something you want to do anyway, and all of its prerequisites are civics you have to research regardless in order to reach Medieval Faires. Veterancy is an incredible policy card for Vietnam, so you would want it sooner or later, since it makes the Thành even cheaper, along with all buildings inside.

A hidden benefit of the Thành is that it makes counterespionage simple and efficient. One Spy, when placed on a Thành tile, is able to protect all

Districts around it, allowing Vietnam to easily protect their properties against sabotage. Also, since Vietnam is the only civilization incentivized to build Encampments in every city, they are the best to make use of the otherwise lackluster Consulate, making spying against Vietnam even harder.

A pitfall that many players often get caught into is to put yields above anything else. Remember, this is still an Encampment, its defensive capability is also something should be taken into consideration. A huge Thành formation right in the core of your empire connecting

Districts from multiple cities can be satisfying in terms of

Culture output, but it does next to nothing against an invasion from outside. Hence, cities on the outskirt of your empire should be treated as standalone cities, their Thành should be prioritized for defensive purposes and help shield your core cities from outside aggressions. These core cities, thus, can safely use their Thành for

The word “thành” refers to a citadel or fort, but classical Vietnamese architecture combined military protection with architectural artistry. The oldest thành in Vietnam is the Thành Cổ Loa, in a district of what is now Hà Nội. Local legend tells of how the king had angered a magical turtle by continually trying to build a thành on the turtle’s back. After becoming aware of this magical, talking, and very very angry turtle, the king agreed to relocate the site for the thành. In thanks, the turtle gave the king a magical crossbow, some thousand times the strength of an ordinary one. While the crossbow has been lost to time, the citadel still stands, with its spiral outer walls and rectangular internal keep.

Thành often had a rectangular internal keep surrounded by a moat. The citadel’s walls could be thick and durable, but, at least in the case of the stunning thành at Huế, the upper level was often beautifully painted and carved with dragons and other auspicious symbols of royalty.

In central Hà Nội, the thành Thăng Long remains the city’s predominant symbol, with its squat central tower and thick walls. Built in 1010, this central fortress was so impressive that it was used as a base by groups as disparate as the royal family, the French military during the colonial period, the Japanese imperial army (as a prison), and the communist People’s Army of Vietnam. It was not just a military outpost, though, as it was decorated with carved stone dragons, elaborate palaces (now destroyed), and, now, serves as a museum. 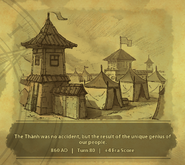 Historic Moment for building the Thành
Community content is available under CC-BY-SA unless otherwise noted.
Advertisement