Culture from each adjacent wonder

Culture from each adjacent Entertainment Complex or Water Park tile

Culture from each adjacent Pamukkale tile
+1

Culture from every 2 adjacent district tiles


The Theater Square is a specialty district in Civilization VI, dedicated to cultural pursuits. It requires the Drama and Poetry civic.

The following buildings can be constructed in a Theater Square:

The Theater Square is your main tool for pursuing a Cultural Victory. Although the

Tourism mechanics in Civilization VI are a bit different when compared to the previous game, Great Works still provide most of your

Tourism output. But, as before, without slots where you can place the Great Works, you cannot even produce them! That's where the Theater Square and its buildings come into play.

Of course, this district has another purpose: as the main booster of

Culture output of your cities, it not only helps widen your borders more rapidly, but most importantly it helps you acquire Civics more quickly! This in turn allows you to tweak your government more often, which makes your civilization more versatile.

As the urban middle-class took on aspects of being "cultured" in the late 19th century, it demanded more refined entertainments than bear-baiting and bare-knuckle boxing. Theater districts were the answer, usually clustering around existing theaters and museums patronized by the upper-class. Thus New York City's Broadway district saw a number of new music halls and restaurants open immediately after the Metropolitan Opera House relocated to West 39th and Broadway in 1883. In the earlier 1800s, London's West End theater district expanded outward from the Royal Opera House in Covent Garden. In time, all those that feed off theatrical talent were also found in the theater districts: recording studios, radio studios, agents, producers, and so forth. 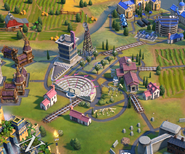