Theodora I or Θεοδώρα (c. 500 – 28 June 548) was the wife of Emperor Justinian I. She ruled over the Byzantine Empire, which (at its peak) ruled over most countries around the eastern Mediterranean. She leads the Byzantines in Civilization V: Gods & Kings.

Theodora I speaks regular Attic Greek, which was historically the preferred language of Byzantine scholars and monarchs. On her diplomacy screen, her pose, dress, and surroundings resemble the painting The Empress Theodora at the Colosseum by Jean-Joseph Benjamin-Constant, and her crown resembles one from a mosaic portraying her in the Basilica of San Vitale in Ravenna, Italy. The Hagia Sophia can also be seen in the background.

Theodora will most likely attempt either a cultural or domination victory, with a preference for the former.

Population and its output of

Faith. In addition to founding and spreading a religion, she will often try to build wonders and protect city-states in her sphere of influence.

Theodora puts little emphasis on raising an offensive army. Her navy and defensive army, however, will both be rather large, and her cities will have some of the best defenses in the game.

Theodora has a very friendly and forgiving personality and rarely asks for help. She is one of the easiest leaders to befriend, but she is often disloyal and can sometimes be an untrustworthy ally.

Although Theodora is not very bold and is not a warmonger by any means, she is competitive and temperamental. She is likely to become hostile toward players who build wonders that she covets, convert her cities to their own religion, or try to win the favor of city-states that she has befriended.

Theodora, wife of Justinian I and Empress of the Byzantine Empire, ruled one of history's preeminent empires during the 1st millennium AD. Known today as the most influential woman of the Byzantine Empire, Emperor Justinian named Theodora co-ruler of the empire, trusting in her wise counsel to guide his reign. Rising from humble beginnings, Theodora would become known throughout the empire - and history - as a tactful, trusted advisor to her emperor. She would be so crucial to the progress of the empire that some think it was Theodora, not Emperor Justinian, who truly guided the people of Byzantium during her lifetime.

Most of our knowledge of Theodora comes from the writings of noted Byzantine historian Procopius of Caesarea, who extensively documented the life and times of the Byzantine Empire during Theodora's reign in the 6th century. Theodora's early life as we know it was a colorful one, her father having been a bear-keeper at the Hippodrome, her mother an acrobat. Said to have had exceptional intelligence and wit, Theodora supported herself independently as an actress for some time before catching the eye of Justinian, then heir to the throne of his uncle, Justin I.

Ascension to the Throne[]

As mistress to Justinian, Theodora's beauty and intelligence made such an impression that he elevated her to the rank of patrician, where she joined the aristocratic families of the empire. Although Byzantine law prevented members of the government from marrying entertainers such as Theodora, Justinian's devotion to her was apparently enough that he had the law repealed. In 525, Justinian and Theodora were married, and shortly after his ascension to the throne as Emperor in 527, Theodora became "Augusta," or Empress of the Byzantine Empire.

Theodora was no ordinary consort to the Emperor; Justinian ensured that she was named co-ruler, an important distinction that provided her with a much greater role in political affairs. During her reign, she was influential in the institution of numerous progressive (even by modern standards) policies. Theodora is credited with pressing Justinian to increase the rights of women within the empire, not only expanding their right to property ownership, but also reforming divorce laws that previously favored men.

Theodora was what is known as a "Monophysite Christian," meaning she believed that Jesus Christ was an entirely divine being, unlike the more prevalent Orthodox belief that Jesus had a dual nature (divine yet with an earthly body). This ideology was highly controversial at the time, and considered divisive and heretical by many members of the Orthodox Church. Despite Justinian's Orthodox beliefs, Theodora maintained her own independence as a Monophysite, and even sheltered the Monophysite leaders who were often oppressed by the Orthodox majority. Theodora is also known to have founded a Monophysite monastery in the city of Sycae near Constantinople.

The fortitude of Theodora and Justinian would be tested during the Nika Revolt, an uprising led by two opposing political factions (the Greens and the Blues), who attempted to install a rival Emperor to usurp Justinian's power. As the story goes, Justinian's natural instinct was to flee the city, but Theodora encouraged him to stand fast. Imploring Justinian to remain in the city, Theodora argued that it was better to die as an Emperor than as a fugitive. Believing in the wisdom of Theodora's words, Justinian remained in Constantinople and ordered his most loyal general, Flavius Belisarius, to attack the rebels. Herding the dissidents into the Hippodrome, Belisarius and his men annihilated them, brutally killing thousands, and quashing the rebellion.

Empress Theodora left an indelible mark on history as one of the most powerful women of her era. It's clear that her influence affected many of the decisions put forth by her husband and, many historians agree, had it not been for Theodora's wise counsel during the Nika Revolt, Justinian's rule as Emperor would likely have ended, and the integrity of the empire itself would have been at risk.

All hail the most magnificent and magnanimous Empress Theodora, beloved of Byzantium and of Rome! From the lowly ranks of actress and courtesan you became the most powerful woman in the Roman Empire, consort to Justinian I. Starting in the late 520's AD, you joined your husband in a series of important spiritual and legal reforms, creating many laws which elevated the status of and promoted equal treatment of women in the empire. You also aided in the restoration and construction of many aqueducts, bridges and churches across Constantinople, culminating in the creation of the Hagia Sophia, one of the most splendid architectural wonders of the world.

Beautiful Empress, Byzantium is in need of your wisdom and strength - her people are lost without your light to lead them. The Byzantine Empire may have fallen once, but its spirit is still intact waiting to be reborn anew. Can you return Byzantium to the heights of glory it once enjoyed? Can you create a civilization to stand the test of time? 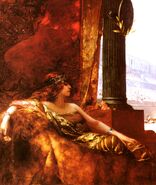 The Empress Theodora at the Colosseum, by Jean-Joseph Benjamin-Constant

Mosaic of Theodora from the Basilica of San Vitale