Building of the Industrial Era

Amenities from entertainment. This bonus extends to each City Center within 6 tiles.

Production. This bonus extends to each City Center within 6 tiles.
+3

Amenities to this city if there is at least one Geothermal Fissure within its borders.

Wikipedia has a page called:
Spas in Budapest

The Thermal Bath is a unique building of the Hungarian civilization in Civilization VI: Gathering Storm. It is built in the Entertainment Complex district and replaces the Zoo.

The Thermal Bath is an interesting replacement for the standard Zoo, a rather underutilized building in an underwhelming and often neglected district. This building encourages the Hungarians to look for and settle near Volcanoes where Geothermal Fissures are available (likely a simple task thanks to their sizable start bias towards this terrain feature). Under various conditions, the Thermal Bath supplies as many

Amenities as or even twice as many as the Stadium at only three quarters of the production cost, not to mention extra regional

Tourism, thus if you manage to settle near a Geothermal Fissure, you can easily make all of your cities within 6 tiles ecstatic without wasting 480 more

Production on building a Stadium for more

Unlike the normal Zoo, the Thermal Bath does not grant +1

Science to Marsh and Rainforest tiles in the city.

The culture of bathing in Hungary has deep roots from both the East and West, and the country is dotted with numerous natural thermal springs. Some of the most famous baths were built near Budapest, including the grand Szechenyi, the luxurious Art Nouveau styled Gellert, and the ancient Rudas (which still preserves much of its Ottoman style). The baths and their buildings boast grand architecture and artwork, and huge bathing pools. Hungary may have the largest proportion of thermal baths per capita of any country in the world, and they are a popular draw for tourists.

If you go to a Hungarian thermal bath, you have a number of choices available to you. You can relax in the warm indoor pools and soak in the salubrious mineral waters. You may get a massage. You can visit a sauna, or douse yourself in cold water should you choose. You should definitely have a friendly chat with your companions. The quality of the water at each bath is said to benefit a specific set of conditions, which would seem to warrant an in-person comparison—for science's sake, of course. 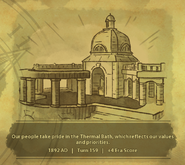