Great Artist of the Industrial Era

• Salome with the Head of John the Baptist

Wikipedia has a page called:
Titian

Titian is an Industrial Era Great Artist in Civilization VI.

Salome with the Head of John the Baptist (

With commissions from the likes of Pope Paul III, King Philip II of Spain, and Holy Roman Emperor Charles V, Tiziano Vecellio – Titian – was well-known and well-favored. Born at some point between 1488 and 1490 (church records being what they were), Tiziano spent his early years in Pieve di Cadore, then a Venetian holding. Not much is known of this stage of his life. In 1516 Titian began work on his first major commission, finishing the 'Assumption of the Virgin' two years later for the church Santa Maria Gloriosa dei Frari. His deft use of color and his realistic rendering of the human form immediately made him a star.

This led him to gain more commissions from an international clientele, such as the 'The Worship of Venus' for Alfonso d'Este, Duke of Ferrara, and 'Venus and Adonis' for Philip II. (Titian seems to have had a fixation on the Roman goddess of love, for he painted several pieces featuring her.) In 1525 he married Cecilia, who had been his “housekeeper” for five years (and already borne him two sons). In August 1530 Cecilia died and he remarried, although nothing is known of her.

Titian also turned his hand to portraiture, doing two for Pope Paul III, and in 1532 and 1548 those of Charles V. As a result, the happy Holy Roman Emperor made him a Count Palatine and Knight of the Golden Spur, and his children were made nobles of the Empire. Throughout these last years, he experimented with different styles, developing a freer use of the brush and less realism. Titian continued to paint until his death in Venice in August 1576, likely of the plague. 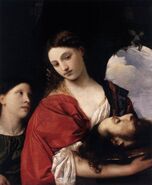 Salome with the Head of John the Baptist 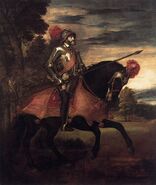