Combat Strength. Can build a Pā.

The Toa is a unique melee unit of the Māori civilization in Civilization VI: Gathering Storm. It replaces the Swordsman and is unlocked with Construction.

This unit is almost identical to the Indians' Varu in terms of statistics: it has the same

Gold costs, requires no resources to train and has an ability to lower adjacent enemies' strength. It has slightly lower

Combat Strength and is unlocked slightly later than the Varu, but comes with an edge in the form of the Pā. This tile improvement works identically to an early Fort, except for the extra ability to heal the unit ending its turn on this tile. In combination with the innate Haka War Dance ability, this makes the Toa almost impossible to kill when it is on defense, making invasion against the Māori during this time period a tall order. Although not as effective on offense, the Toa is still a force to be reckoned with, as its only downside is shared by every other melee unit (and of course, their unofficial "twin," the Varu): slow

Movement. If you plan a conquest with the Toa, remember one Toa unit can only build the Pā once, so the location of placement is vital to maximize the improvement's defensive capability on top of the Toa's combat prowess.

build charge). Just like the Roman Legion, a common strategy with the Toa is to use one Toa to chop Woods to instantly train another Toa, which can be kept going until you deplete the source of Woods around you. Just keep in mind that clearing features will consume the

build charge, so building a Pā won't be possible anymore.

Similar to the Varu, the Toa's

Combat Strength penalty to nearby units applies to both land and naval units, even when the Toa is embarking. However, it will not reduce the

Combat Strength of a nearby embarked unit below the embarkation

Combat Strength threshold. However, unlike India, the Māori has strong incentives to try to wrest control of the oceans to provide safety to their units when exploring, but they have no edge in naval warfare whatsoever. You can create an advantage for yourself by keeping a few Toa units around without upgrading them, then put them in formation with your naval units. The

Combat Strength penalty aura will then be carried by these ships, making the Toa relevant to the very end of the game.

With the introduction of the Man-At-Arms in the April 2021 Update, the domination prowess of the Toa is significantly reduced. Since the Man-At-Arms is unlocked almost very closely after Iron Working, and is very easy to beeline, the Swordsman and its replacements seem a little bit pointless. The Toa gets hit the hardest among the 5 unique Swordsmen, since it is the only unique unit in the game that is unlocked later than the standard unit, making the already narrow window of opportunity even narrower. It is also the most expensive unique Swordsman, which clearly makes the matter even worse. With the ability to construct Pā in neutral and friendly territory, the Toa's defensive capability stays the same, but the ability to have a timing rush with this unit is now almost non-existent, especially on high difficulty levels.

The Maori word Toa translates simply as “warrior” when used as a noun, and “to win” when used as a verb. In Maori culture, the concept of utu implies that behaviors should be balance, with positive behaviors and gifts rewarded, and wrongs punished to a proportional extent. The Maori culture possessed gradations for these responses, from raiding to full violence. Failure by a leader to respond appropriately could bring about a loss of their mana. European observers were particularly impressed (one might even say terrified) by the great strength and energy of the toa they encountered.

The toa had some distinctive weapons. The staff-like taiaha is made from hardwood, slightly flattened on one end (called the ate), with a stabbing base end below the hand grip. This is the weapon traditionally used during the wero—the traditional challenge at the beginning of a powhiri welcoming ceremony. The smaller, paddle-shaped mere was made from greenstone, with a wrist cord passing through the handle, and used as a stabbing weapon. Mere were also ceremonial objects, used to indicate the prestige of the bearer, due to the difficulty of their manufacturing. Larger clubs were called patu, and were made of hardwood, stone, or bone.

Maori created strong hill forts called Pa, which consisted of terraced land, protected by an elaborate system of palisades and ramparts, encompassing an inner area with access to fresh water and food stores. The introduction of gunpowder weapons and modern artillery eventually rendered these obsolete.

Today the toa are best known for the practice of the haka, the terrifying, energetic chant and dance originating as a war dance. Originally performed to indicate the great strength and skill of the toa, they are performed today by both men and women as part of many activities, including sporting events, formal greetings, and weddings. 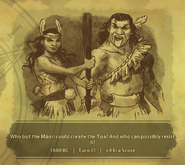 Historic Moment for building the Toa