Combat Strength for all units when attacking wounded units. Units heal up to 30 hit points after killing an enemy unit.


"My clothing is a Scythian cloak, my shoes are the hard soles of my feet, my bed is the earth, my food is only seasoned by hunger."

Wikipedia has a page called:
Tomyris

Tomyris was a queen who reigned over the Massagetae, a Scythian pastoral-nomadic confederation in Central Asia, known for allegedly defeating and killing Cyrus the Great in 530 BC. She leads the Scythians in Civilization VI.

Tomyris' Scythia is going to be a threat to strike quickly and decisively at any time, especially during the Ancient and Classical periods. Luckily she has a strict code of honor and will never backstab anyone; she'll only be attacking those who deserve it for mistreating others.

All people will tremble with fear and respect for you, great warrior Queen Tomyris. For it is from the back of your stallion that you shall look upon and lead the Scythian people. Great epics will be told of the horse warriors that ride forth from the steppe, and at the front line of every battle - they will find you. Ride on, fierce queen, and may your friends be true just as your enemies falter.

Tomyris' unique agenda is Backstab Averse. She likes those willing to become her Declared Friends, but hates those who declare Surprise Wars on other civilizations, especially if declared against former friends or allies.

Her leader ability is Killer of Cyrus. All her units receive +5

Combat Strength when attacking wounded units, and heal up to 30 hit points (as of the Summer 2017 Update) when they eliminate a unit.

The Scythians are the masters of the open Grasslands and Plains. They are a purely military civilization who wants to settle near Horses and other Pasture-based resources. These locations will let them build plenty of mounted units and find desirable places to plant their Kurgans, a key component to them getting a Religion started (hopefully one where they can worship the God of the Open Sky Pantheon). Be very cautious if Tomyris is on the continent with you - a Surprise War against another civilization means you'll have her at your throat quickly. It'd be much like declaring war on two civilizations at once.

Tomyris is voiced by Alina Irbekov Berezova. She speaks the Iron (pronounced like "e-ron") dialect of Ossetian, one of the few surviving languages of the Eastern Iranian family to which the Scythians' language belonged.

Delegation: I have sent you a trade delegation bearing a decorated gorytos as a gift for you. You do have a bow, yes?

Accepts a Delegation: Your delegation arrived bearing your tribute to the Empress. It is greatly appreciated.

Accepts Player's Declaration of Friendship: I will accept your friendship, but do not betray my trust.

Refuses Player's Declaration of Friendship: My friendship is not given lightly. You must earn my trust, first.

Requests Declaration of Friendship: Friendship is the most valuable thing between nations. Let us have it.

Denounced by Player: No one will believe your hollow lies. Tomyris is a good friend to the worthy.

Denounces Player: You are a wretched liar and cannot be trusted! You are the worst of your kind.

Invitation to Capital: Yes, my people are nomadic, but we still have a magnificent capital. And you?

Invitation to City: We have a city nearby. Would you like to visit? We could fit you for one of our pointy hats.

The ancient Scythian “queen” Tomyris is mentioned in the “histories” of Herodotus, Strabo, Polyaenus, Cassiodorus and Jordanes. The French poet Deschamps listed her as one of the nine “Lady Worthies” in his 14th Century ballades. She has been depicted artistically by the illustrious likes of Rubens, Allegrini, Mattia Preti and Gustave Moreau, even though no one knows what she actually looked like. In point of fact, outside a single military engagement reported by Herodotus and repeated by others ad nauseam, little that’s factual is known about Tomyris.

Here’s what Herodotus had to say, heavily paraphrased...

Tomyris was the widow of a Scythian chieftain c. 530 BC who had assumed his leadership of a group of tribes. The chieftainess also had at least one child, the ill-fated (or perhaps just inept) Spargapises, who commanded the first rank of horse-warriors. Meanwhile, Cyrus had taken command in the Achaemenid Empire (too often referred to as the “First Persian Empire”); although he had plans to expand to the south, which would bring him into conflict with powerful Egypt, he had to first secure his eastern borders, where the unpredictable Scythians (of which the Massagetae were a branch) were raising hell.

Cyrus first tried the usual ploy – if you couldn’t avoid trouble, marry it. He dispatched envoys to Tomyris with an offer of wedded bliss. Tomyris, obviously no fool and realizing it was not her that Cyrus courted but her kingdom, replied in the negative. Cyrus, therefore, marched his army to the River Syr Darya; not concealing his hostile intent, Cyrus ordered boats built. No doubt he figured there’s more than one way to skin a horse. Tomyris, in turn, dispatched a message that called for a battle between the two forces (she’d also assembled her host), reading, in part, “leave your useless toil of bridge-making; let us retire three days’ march from the river bank and do you come across with your soldiers; or, if you like better to give us battle on your side, retire yourself an equal distance.” In council, the great king’s advisors recommended having at it on the Persian side.

But Cyrus was convinced that a different plan would prevail. Upon the advice of Croesus the Lydian, Cyrus agreed to meet the Scythians on their side, crossing the river and marching well inland. There a camp would be established, well stocked with wines and spirits, with which the barbarians were unfamiliar. And it would be guarded by a handful, as Cyrus led his army away to the planned battlefield. But, in truth, the army would march a short ways and await the inevitable attack on the camp by the horsemen. Then, after a suitable time had passed for them to be well intoxicated, Cyrus would fall upon them and thus win the day.

And so it fell out. The drunken Massagetae-Scythian rabble, led by Spargapises, were overwhelmed, losing a third of their number in minutes with most of the rest captured, including Tomyris’ son. Upon hearing of the debacle, Tomyris dispatched a herald to announce that, since he had been captured “by trickery not in the battle of strengths,” her son was to be released. Cyrus refused, and now-sober Spargapises committed suicide (although Herodotus doesn’t provide any details on this). The enraged mother gathered her horse-archers and allies, and gave battle. According to the old Greek’s account...

“The following, as I understand, was the manner of it: First, the two armies stood apart and shot their arrows at each other; then, when their quivers were empty, they closed and fought hand-to-hand with lances and daggers; and thus they continued fighting for a length of time, neither choosing to give ground. At length the Scythians prevailed. The greater part of the army of the Persians was destroyed and Cyrus himself fell, after reigning nine and twenty years. Search was made among the slain by order of the queen for the body of Cyrus. When it was found, she dipped the head of Cyrus into blood and thus insulted the corpse, ‘I live and have conquered you in fight, and yet by you am I ruined, for you took my son with guile; but thus I make good my threat, and give you your fill of blood.’ Of the many different accounts which are given of the death of Cyrus, this which I have followed appears to me most worthy of credit.”

And, with that, Tomyris, warrior-chieftain of the Scythians, disappears from "history" (if she was ever part of it)... as the Scythians themselves would do a few centuries later. But it does make for a rousing tale of a mother’s vengeance. 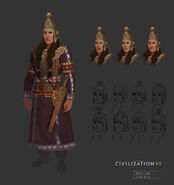