Doubles base yields of all adjacent tiles

Torres del Paine doubles the base terrain yields of all adjacent tiles, though it does not modify the additional yields from resources, or from terrain features such as forests. Tiles adjacent to multiple wonder tiles do not receive multiple instances of this bonus.

In Civilization VI: Rise and Fall, discovering Torres del Paine grants +1 Era Score, or +3 Score if the player is the first to do so.

Torres del Paine is one of the best Natural Wonders in the game, only rivaled by a select few like Mount Roraima or Païtiti. Each Torres del Paine tile doubles the base terrain yields of all adjacent tiles (does not stack), which gives you an amount of

Production impactful enough to get any new city nearby off to an amazing start. If possible, always prioritize putting at least one city next to Torres del Paine.

The sheer vertical spires of the Torres del Paine are named for their color - "paine" meaning "blue" in Tehuelche. The feminist and correspondent Lady Florence Dixie described the three granite towers as “Cleopatra’s Needles” in her 1880 book; she has the dubious distinction of being the “first foreign tourist” to the region. Sadly, she wasn’t the last, for the Torres del Paine Park has suffered three major forest fires since 1985 due to careless backpackers. Fortunately, the three peaks of the Paine Massif, standing 2850 meters above sea level, are surrounded by lakes and glaciers and were relatively untouched by the flames. The park itself encompassing the Torres del Paine peaks was established in 1977 by the Chilean government, and the following year the park was designated a World Biosphere Reserve by UNESCO. 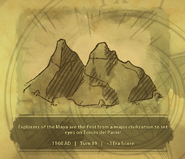