Building of the Renaissance Era

Tourism when in a Golden Age.

Wikipedia has a page called:
List of fortifications in Georgia (country)

The Tsikhe is a unique building of the Georgian civilization in Civilization VI: Rise and Fall. It is built in the City Center and replaces the Renaissance Walls.

After numerous buffs, the Tsikhe has been transformed from a ridiculously underwhelming building into a safeguard that dissuades even the most bloodthirsty warlords from invading Georgia. It now provides twice the outer defense of the standard Renaissance Walls, turning Georgian cities into impenetrable fortresses. The latest buff towards Georgia's civilization ability (+50%

Production towards walls) makes this building even more potent. Moreover, it plays strongly to the Georgian unique ability of chaining multiple Golden Ages. Considering that the Tsikhe is built in the City Center (meaning that it can be built in every city), combined with Tamar's leader ability, you are looking at a significant

Tourism output as long as you can continue your Golden Ages. After the general buff towards the Renaissance Walls that make them immune to Siege Towers and Battering Rams, the Tsikhe is so tanky that it can withstand even rounds of Bombards. However, considering that this is the only piece of unique infrastructure that can be rendered obsolete with technological research, make sure you delay researching Steel until you build your Tsikhe in every city. With its boosted

Tourism output in Golden Ages, this building can contribute meaningfully to a Cultural Victory, if you can make the best out of your civilization ability to chain Golden Ages.

Valletta's Suzerain bonus has excellent synergy with Georgia, since it allows you to instantly purchase walls and other City Center buildings with your massive

Faith income rather than dedicating

Turns toward building them. If Valletta isn't present in a game under the Gathering Storm ruleset, you can build your Tsikhe with maximum efficiency by slotting Limes and having an active Urban Development Treaty (a World Congress resolution) for City Center buildings. These, when combined with your civilization ability, will yield a 250%

Conversely, Akkad's Suzerain bonus will render your Tsikhe (and all other walls) useless against melee and anti-cavalry units' attacks. If Akkad is in the game, do your best to deprive your opponents of its bonus, or even conquer it if its location makes doing so feasible.

High over the landscape, situated in the hills and rocky cliffs, the Georgian fortresses guard the countryside. The tsikhe feature high curtain walls with either rounded or triangular merlons (the solid part of the “cut outs” on the wall). A tower stands at each intersection of joined wall.

The Georgian fortresses were particularly difficult to assault due to their position on the high ground. Although this type of fortress existed during the time of Alexander the Great, the Georgians used them effectively through the 17th Century. 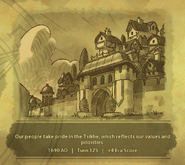 Historic Moment for building the Tsikhe
Community content is available under CC-BY-SA unless otherwise noted.
Advertisement