"Tsingy is a 250-square-mile tiger trap made up on massive obelisks riddled with jagged spears. And yes, they will cut your pretty face."
– Budd Erickson

Science, and +2 Appeal to each adjacent tile.

In Civilization VI: Rise and Fall, discovering Tsingy de Bemaraha grants +1 Era Score, or +3 Score if the player is the first to do so.

Like other impassable wonders, the Tsingy de Bemaraha wonder tile offers no benefits, and cannot be developed or improved. However, its tile provides +1

Science to up to six adjacent tiles; these yields are cumulatively worth considerably more than the dead tile. It is usually worth incorporating single-tile wonders within city borders to maximize their yields.

Similarly to other Natural Wonders, the Appeal bonus of Tsingy de Bemaraha is also ideal for building Neighborhoods, and is useful when founding National Parks.

Hardly a vacation spot for the kiddies, Tsingy de Bemaraha is a karst topology of jagged limestone formations, undercut with sinkholes and caves, on the island of Madagascar. Together with the adjoining Strict Nature Reserve (a lot of animals make their home among the intermixed spires and forests, including eleven species of lemurs), it was designated a UNESCO World Heritage Site in 1990 AD. The labyrinth of vertical rocks – in places 300-foot high and all razor sharp – is hardly easy to reach (a five-day journey from Madagascar’s capital city) and not for the faint-hearted. Naturalists that have ventured into Tsingy de Bemaraha have had to crawl out seeking medical aid. It's only to be expected when tsingy is the Malagasy word meaning “where one cannot walk barefoot.” 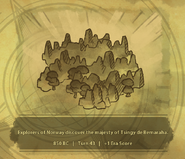