Combat Strength when fighting on Ocean tiles. Able to reveal other stealthed units.

Wikipedia has a page called:
U-boat

The U-Boat is a unique naval raider unit of the German civilization in Civilization VI. It replaces the Submarine.

Combat Strength bonus and the ability to reveal invisible units coming slightly earlier than a Destroyer. It is the weakest piece in the German arsenal - not because there's anything inherently wrong with it, but because it replaces a unit that doesn't come into play very often for a number of reasons and fixes none of the problems with this unit. (Read more here.) The U-Boat is a rather underwhelming unit overall, and in the expansions, German players will most likely build it just for the Era Score bonus: Germany doesn't excel at coastal raids like Norway or the Ottomans, and while the U-Boat is strong against other naval units, it is much less effective against cities than the Battleship. However, Letters of Marque helps players produce this unit a bit faster and makes it slightly more potent by giving it a +2

Movement bonus, and it doesn't consume

Oil like a standard Submarine, which helps its owner save a bit for other units or to use on

The 'Unterseeboot' – U-boat – struck fear, and anger, in the hearts of Germany’s enemies during two world wars. The first German-built submarine, the 26-foot long Brandtaucher (“fire-diver”), sank during its initial test dive in the harbor at Kiel. This was followed by several submersibles built in Germany, which were sold to the Greeks, Ottomans, and Russians (all had rather ignominious careers). Finally the Germans got it right; the U-19 – they finally quit giving the boats names – was launched in 1912 with two-stroke diesel engines, four torpedo tubes and two deck guns, and able to dive to 164 feet. At the opening of WW1, Germany had 28 U-boats in service; in the first ten weeks, these sank five British cruisers. So effective were the U-boats that the Treaty of Versailles forbade the construction of German submarines. But, the U-boat fleet was rebuilt, and by the end of WW2 the boats had sunk some 2779 ships (confirmed) totaling 14.1 million tons – roughly 70% of Allied losses in all theaters. In 1955 West Germany was allowed to have a navy again ... and promptly started building U-boats, the latest being the non-nuclear U-35, commissioned in March 2015.

A U-Boat up close 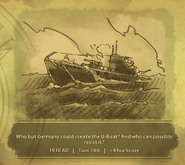 Historic Moment for building the U-Boat
Community content is available under CC-BY-SA unless otherwise noted.
Advertisement