"The rising world of waters dark and deep, won from the void and formless infinite."
– John Milton

Production. Ubsunur Hollow increases the Appeal of adjacent tiles by +2.

Like normal Marsh tiles, Ubsunur Hollow tiles have a

Movement cost of 2, and reduce the

Combat Strength of defending units by -2.

Discovering Ubsunur Hollow grants +1 Era Score, or +3 Score if the player is the first to do so.

Each Ubsunur Hollow tile has a yield of 2

Faith is often hard to generate early in the game, incorporating the natural wonder tiles can provide a vital head start in founding a Pantheon before any other player. Ubsunur Hollow also helps in making a tundra start less taxing for the Russians, Canadians, and anyone else who happens to spawn there. In time and with some planning, it can also make for an easy National Park or two.

Unfortunately, as with all natural wonders, the Ubsunur Hollow tiles cannot be developed or improved. Because of this, natural wonders may be more of a hindrance than an asset later in the game - a natural wonder in the heart of a city can spoil adjacency bonuses for Farms and

Districts. In general, passable wonder tiles are significantly better than an unimproved tile of any kind, though they are often less productive than an ordinary tile with a tile improvement or district.

The land of Ubsunur Hollow (or “Uvs Nuur Basin”) is a pocket in time. Few signs of human life mark this Eastern Siberian region, but for the barrows dug for the ancient dead, massive stones erected as ceremonial monuments, and the haunting sounds of Tuvan throat singing.

The basin, just smaller than Puerto Rico, spans multiple biomes. All manner of unique species find a home in the Hollow’s deserts, marshes, tundra, and saltwater lakes. One such animal is the endangered snow leopard, once hunted to near-extinction. Now that the area is a protected reserve, the leopards can repopulate without fear of natural predators (beyond the occasional farmer concerned about their livestock). 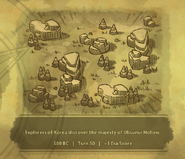