"What a grand sight this must present in the wet season; waterfalls in every direction!"
– William Gosse

Wikipedia has a page called:
Uluru

Faith, and +4 Appeal to each adjacent tile.

Despite its appearance and Civilopedia description, Uluru is not considered a Mountain in-game.

In Civilization VI: Rise and Fall, discovering Uluru grants +1 Era Score, or +3 Score if the player is the first to do so.

Like other impassable wonders, the Uluru tile offers no benefits, and cannot be developed or improved. However, Uluru provides +2

Faith to up to six adjacent tiles; these yields are cumulatively worth considerably more than the dead tile. It is usually worth incorporating single-tile wonders within city borders to maximize their yields.

The Appeal bonus of Uluru (+4 to adjacent tiles, instead of the usual +2 from other natural wonders) is perfect for building Neighborhoods, and is useful when founding National Parks.

Fittingly, the Australians will want to settle near Uluru if they find it in their game, as its high Appeal translates to high yield bonuses for their districts.

The massive sandstone formation at Australia's geographical center is an inselberg—an "island of rock" emerging from the surrounding flat bushlands. Known as Uluru to the Aboriginal people of the area, it has held cultural and spiritual significance to the Anangu people for countless generations. In 1873 a colonial explorer called it “Ayers Rock” in honor of colonial functionary Henry Ayers, whose greatest accomplishment was having his name applied to a large rock that already had a name. Uluru is known for its natural beauty and shifting colors, especially apparent at dawn and dusk. 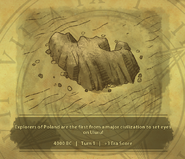