How to Win as Harmony 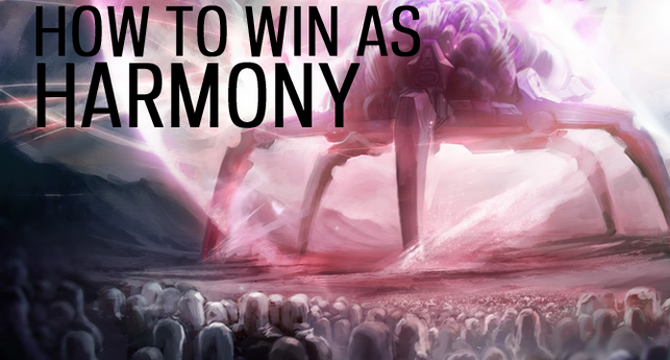 Philosophically, the Harmony affinity centers on the belief that humanity is and always will be an aspect, as opposed to the defining character of, its environment. Instead of mastering or dominating nature, a la Purity or Supremecy, Harmony sees benefit in adapting to it, merging the human genome with that of the aliens', and reaping the rewards. You could say that Harmony players are in touch with nature, though the Miasma-covered landscapes of Beyond Earth's exoplanets are a far cry from Earth's forests. Strategically, The Harmony Affinity tends to reward a passive and high growth approach, so players who have less interest in winning via domination or brute force, and more interest in steadily growing various resources and employing defenses to keep the fruits of that growth protected, should consider pursuing the affinity.

First, let's examine the Harmony affinity bonuses, which the player achieves after acquiring a given number of Affinity points.

Alien aggression level returns to neutral twice as quickly: this bonus provides ample incentive for acquiring Harmony points early in the game, especially on worlds bustling with alien life. If you've managed to irritate the aliens, or if they've become aggressive for another reason, they will return to a passive state twice as quickly, leaving you alone to build your civilization instead of having to focus on military units to fight them off.

Units take 5HP less damage from Miasma: Miasma is another factor that can prove very irksome during the early game. By halving the amount of damage units take while standing on Miasma-covered tiles, Harmony players have more freedom of movement early in the game, which helps quite a bit when sending explorers to recover resource pods and establish expedition sites or when sending colonists to expand the civilization. Additionally, though early aggressive play is not recommended for most Harmony players, the Miasma bonus also provides players with an early military advantage for combat on Miasmic battlefields.

Units heal 5HP in Miasma: Taking Level 3's bonus one step further, Miasma now becomes a healing agent, allowing any unit standing in it to heal 5HP per turn. There is now reason to construct units and buildings that actually produce Miasma, shrouding your burgeoning civilization in the substance and giving opponents one less reason to think about stepping foot inside of it.

4 Xenomass resources for free: Xenomass is the affinity resource associated with Harmony and it helps players build construct tile improvements, buildings, and units. Using this valuable resource bonus as leverage during diplomatic negotiations is another approach that players may find beneficial.

Call Worm Strike Operation can be performed by Covert Agents: Here's where things start to get interesting. By Level 11, your understanding of the alien genome is sophisticated enough to truly harness its awesome power, and you can now summon Worm Strike Operations in the Covert Ops menu. Unless your opponents are privy to the fact that you're pursuing Harmony, the attack will go mostly unnoticed, likely viewed as a (frustrating) natural occurrence.

Mind Flower can be constructed for Transcendence Victory Quest: Players pursuing the Transcendence victory need to meet a number of requirements (which will be delineated below), one of which is the construction of the Mind Flower wonder. The Mind Flower is a huge organic structure that taps into the planets consciousness, allowing humans beings to truly become one with the planet.

Players looking to gain Harmony points need to research the right technologies. As with the other affinities, researching these technologies often provide bonuses that align well with a Harmony play-style, though players should still be careful to research them in an order that makes sense with the circumstances of a given match in mind.

The following technologies will provide players with a Harmony XP bonus.:

Understanding and employing Miasma is key to playing Harmony successfully. As mentioned above, Harmony rewards players who prefer a high growth/passive approach to Civilization. Harmony players who, especially in the early game, try to flex their military might and attack other civilizations are not very likely to find much success. Using Miasma as a buffer against stronger opponents further minimizes any incentive they might have to encroach on player's territory and compromise growth operations.

Later in the game, if a player decides to ransack an enemy city, they can use certain units -- specifically, the mighty Rocktopus -- to generate Miasma, clouding the battleground in a gas that heals the player's units and damages his or her enemies'. Many units also have a perk that increases their strength when on a miasmic tile, furthering a player's advantage.

Though it's beens stated multiple times that Harmony might not be the best approach for more aggressive players, that doesn't mean that the affinity lacks units that pack a punch. To the contrary, synthesizing with the alien genome allows for the creation of a variety of powerful military units, which only get stronger as the game goes on.

Most impressive of all is the Kaiju-like Xeno Titan, a gargantuan beast capable of dominating most smaller units and, given the right circumstances, tearing down cities single-handedly. Though it requires a lot of Xenomass to construct, if players find themselves in a dire military situation, fighting off an enemy grasping for a late-game domination victory, the Xeno Titan is the perfect way to remind opponents of nature's awesome power.

The player builds the Mind Flower and must protect it until victory is met. By building the Mind Flower, humans begin to connect with and awaken the consciousness of the planet.

Here's a tip about Miasma from The Skilled Pointman:

As Supremacy does with roads/magrails, harmony should definitely cover their territory in miasma. As it does not affect resources yields and does very little harm to harmony units, it proves an exceptionally useful strategy. It also makes defending the Mind Flower a whole lot easier and makes harmony civilizations all-but-impossible to invade.