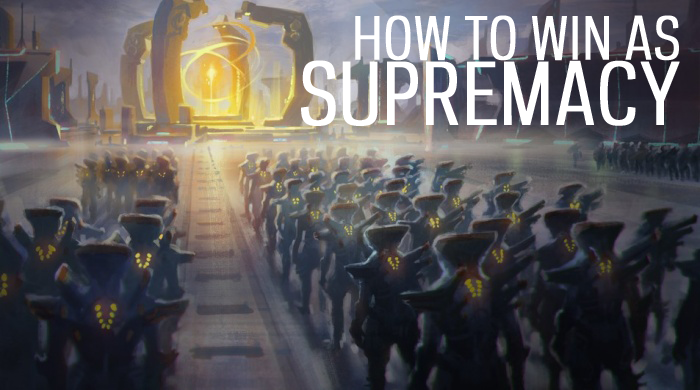 Supremacy units the most machine-like of the three Affinities. They develop sophisticated AI, make widespread use of autonomous and semi-autonomous robotic systems, and in general go the way of bionics, augmentation and merging human and machine. They employ this philosophy not only in their armies, but also in civilian matters, improving their everyday life with devices such as bionic organs, augmented limbs and interface links which allow them to merge their consciousness into an advanced collective intelligence.

Supremacy military strategy utilizes a large amount of robotic infantry and "walker" style vehicles and follows the general strategy of grouping together units for various formation- based bonuses or configuring units for specific tasks; Tacjets can become exceptionally effective at seizing air superiority and keeping it with substantial air sweep and air intercept bonuses and the ablity to conduct two interceptions in a single turn, Combat Rovers can eventually be upgraded to have a total of a 50% flanking bonus along with a 20% adjacency bonus or ignore zones of control, The SABR excells at smashing city fortifications, being the only unit in the game that starts with a range of 3; The CNDR can be either a highly resilient defensive unit or flexible multipurpose unit, The CARVR is a powerful frontline melee combat robot and Supremacy's ultimate unit the ANGEL has the ability to walk over cavernous terrain and costs fewer strategic resources than the other affinities' counterparts. Their resource specialization is

First, let's examine the Supremacy affinity bonuses, which the player achieves after acquiring a given number of Affinity points.

Magrails and Roads sustain themselves, requiring no

Energy upkeep.: Magrails and roads are highly effective means of sharing resources between disparate cities, but at a cost -- if you're a Supremacy player, however, you can ignore their upkeep penalty entirely as soon as you reach Supremacy level 3. This allows you to use your energy elsewhere and further incentivizes connecting cities.

Orbital intelligence and coverage of all

Firaxite planet wide.: Having toruble finding that precious Firaxite? This perk will help with that.

Firaxite stockpiles.: Firaxite is the affinity resource associated with Supremacy and it helps players build construct tile improvements, buildings, and units. Using this valuable resource bonus as leverage during diplomatic negotiations is another approach that players may find beneficial.

The Sabotage Covert Operation is unlocked: Now that you're really starting to understand how technology operates on this new world, you're ready to do some real damage. This perk allows Supremacy operatives to detonate an electromagnetic bomb within a city in order to destroy the electronics of improvements within four tiles of the city, seriously hampering progress (this can be highly effective during mid-game wartime.)

Players looking to gain Supremacy points need to research the right technologies. As with the other affinities, researching these technologies often provide bonuses that align well with a Harmony play-style, though players should still be careful to research them in an order that makes sense with the circumstances of a given match in mind.

The following technologies will provide players with a Supremacy XP bonus.: 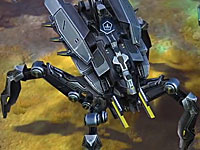 The ANGEL is the

Supremacy ultimate unit. Though not particularly fast, or especially strong it is arguably the cheapest and most flexible of the ultimate units, when upgraded it can even deliver its powerful short-ranged attack while on the move. Keep in mind that the ANGEL only has 1 range but still counts as a range unit, in addition it doesn't have as much melee strength as the more specialized Xeno Titan or as long ranged or potent of a ranged attack as the Lev Destroyer unit. However, it's advantage lies in the fact that has equally strong ratings for both melee combat and ranged fire. Therefore, it has far greater flexibility compared to the other ultimate units allowing it to adapt to the strengths and exploit the weaknesses of other units much more readily and if the situation warrants it a Tier 2 ANGEL can even move after it attacks, possibly onto terrain that other units cannot engage it on such as a canyon or shallow water tile. Also as is the norm with Supremacy's overarching military doctrine, it functions much more effectively when it is a part of a combined arms force rather than by itself.

This victory is achieved with the Supremacy affinity, and consists in returning to Earth and establishing 'order', meaning that humans that do not agree with the Supremacy perspective on Earth are forced to comply, by any means. The player builds a Warp Gate back to Earth and must send 1000 Strength's worth of units to establish 'order', or to presumably in some way control Earth.

Retrieved from "https://civilization.fandom.com/wiki/User_blog:Matt_Hadick/How_to_Win_as_Supremacy?oldid=95659"
Community content is available under CC-BY-SA unless otherwise noted.