The Varu is a unique heavy cavalry unit of the Indian civilization in Civilization VI.

The most important aspect of the special ability of the Varu is that it acts on multiple units at the same time. A single Varu will reduce the

Combat Strength of all enemy units next to it, so the best use for these majestic beasts is to throw them directly into the line of battle and support them with other hard-hitting troops. The Varu will not only weaken all adjacent enemies, but they will also do decent damage. Varu are also an amazing defensive troop since a group of them will weaken an entire army, reducing the damage done to your cities.

Under Gandhi, this unit is more defensive with a domination tendency for skilled players since it is quite slow, but under Chandragupta, the Varu force turns absolutely deadly. Once a War of Territorial Expansion is declared (one of the easier Casus Belli to satisfy), it moves as fast as the standard Horseman, and its 40

Combat Strength and ability to weaken surrounding enemies make it the strongest military unit on the field. A Spearman has only 30

Combat Strength (counting its +10 bonus against cavalry) when fighting next to one Varu, and (in vanilla Civilization VI and Rise and Fall) even less when next to two or more of them. Aim for Military Tradition to unlock Maneuver and keep cranking out an army of Varu, and nothing will be able to stop your march. The Varu's

Combat Strength penalty to nearby units even applies to both land and naval units, even when the Varu is embarking. However, it will not reduce the

Combat Strength of a nearby embarked unit below the embarkation

With the release of Gathering Storm, Varu change in some noteworthy ways. The

Combat Strength penalty they impose on enemy units is no longer cumulative, so enemies will lose 5

Combat Strength even if they're adjacent to multiple Varu, balancing out its power level a little bit. However, in exchange, their

Gold maintenance cost is reduced from 3 to 2, so the Indians won't put as much of a strain on their economy by adding some Varu to their army.

Overall, the Varu is a powerful and effective unit killer. Its negative

Combat Strength aura helps your other units, especially ranged units on the backline, deal more damage on offense and take less damage on defense as well. It is a crucial unit under Chandragupta, much less so under Gandhi.

Although not the most reliable of battle-mounts (as apt to trample friendly troops as enemy when panicked), war elephants were a staple in Indian warfare for centuries until the advent of gunpowder. In pre-gunpowder combat, the 'vāru' (“royal elephant”) served two purposes. Their scent tended to terrify horses, thus rendering the enemy cavalry relatively useless. Second, they could usually break through even the strongest line of infantry, especially if armored, crushing spearmen and archers and everything else in their path (and reaching 25 kph on the run). Too, elephants were notoriously hard to kill, and there are records of them surviving as many as sixty arrows. Usually surmounted with a howdah or other platform for archers, the vāru could wade right into the fray. But, in case the elephants did go berserk and start squashing their own side, the driver carried a spike and mallet to kill them with a blow to the skull. 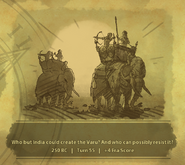