Victor, otherwise known as The Castellan, is one of the Governors introduced in Civilization VI: Rise and Fall. He is the military governor who excels at defending cities from attacks.

Military focused, once established in a city, Victor is instrumental in strengthening, preserving, and defending it from foreign threats.

Because Victor has little offensive ability, he is often seen as one of the less useful Governors. Nevertheless, he can be a great pickup for the cities you have closest to an aggressive neighbor. Although Victor doesn't allow his city to produce units quicker, he can often slow down an advance enough so that all of your cities can produce units to bring to the front before his city falls. His other advantage is that he can be established in a city quicker than all other Governors: he is established in a city in 3 turns, while all other Governors take 5. If you are looking to play more aggressively, Victor's quick establishment time can be the difference between keeping or losing a city during wartime. Also, Victor is best used as a Loyalty stick in captured cities to prevent them from flipping independent.

In Gathering Storm, Victor receives multiple changes, being buffed overall. First, his Garrison promotion now also applies +4 Loyalty per turn to cities within 9 tiles, useful for warmongers who are trying to keep distant conquests in their empire. His Defense Logistics promotion is also buffed, now adding +1 per turn to every accumulating Strategic resource in the city, allowing for maintenance and production of more resource-consuming units. Finally, his Level 2 promotion Security Expert is renamed and given to Amani, the Diplomat, and is replaced with a Level 3 promotion Arms Race Proponent, taken from Pingala, the Educator. This gives a substantial

Production boost to nuclear armament projects in the city, augmenting the creation of the ultimate weapons of the world: nukes.

Notably, the extra ranged strike from Embrasure applies to every

District in Victor's city that has a ranged attack: City Centers, Encampments, and Oppida.

A Castellan is a military officer responsible for directing the day-to-day affairs of a castle or fortress and the territory immediately around it. As castles were massive investments of treasure and important points of military power, the castellan had to be both competent and politically reliable. In times of war, a competent castellan could determine the fate of campaigns, and with that, the historical outcome. 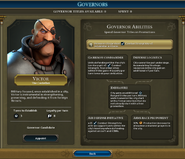