By the Grace of God, Queen of the United Kingdom of Great Britain and Ireland, Defender of the Faith, Empress of India

Founding a city or building a Royal Navy Dockyard outside of England's home continent grants a free melee unit in that city. Gains the Redcoat unique unit with Military Science.


"Do not let your feelings (very natural and usual ones) of momentary irritation and discomfort be seen by others."

Victoria (24 May 1819 – 22 January 1901) was queen of the United Kingdom of Great Britain and Ireland from 1837 until her death. Her reign, one of the longest in history, saw the greatest expansion of the British Empire, as well as significant scientific, cultural, social and political developments, and became known as the Victorian Era. She leads the English in Civilization VI.

Victoria is a polite and gentle young lady as long as she is getting her way. But if you don't let her on your continent, she is not amused!

Your Majesty the Queen Victoria of England, extend your reach beyond your borders and across the face of the globe. Worry not over the possibility of defeat for your loyal redcoats and overwhelming navy will surely carry the day. With your calm and steady touch you can bring all lands under England's sway, establishing a true Pax Britannica.

Her leader ability is Pax Britannica. Founded cities outside of her home continent receive a free melee unit, and another one if a Royal Navy Dockyard is built there. It also grants access to the Redcoat unique unit when the Military Science technology is researched. In Civilization VI: Gathering Storm this ability has been changed; while she keeps the Redcoat, now only the first city founded on each continent other than her home continent is granted a free melee unit, but also grants +1

Trade Route capacity. It also now grants a free naval unit upon building a Royal Navy Dockyard in any city, regardless of its continent; both of these free units will be the strongest she is capable of training.

England (and Victoria) are masters of projecting British power across the globe to every continent. Initially she will use the Royal Naval Dockyard and her Sea Dogs to gain control of the seas, and then move in with Redcoats during the Industrial era and lock down her positions across the globe. This extended reach will complement England's doubled Archaeology, allowing them to get a big jump toward a Culture Victory.

Victoria is voiced by Lucy Briggs-Owen. She speaks British English and uses the pluralis majestatis to refer to herself.

Delegation: Greetings. We have sent a Royal envoy on behalf of the United Kingdom. We hope they are well received.

Rejects Delegation from Player: My Parliament does not approve.

Accepts Player's Declaration of Friendship: Yes, this pleases us. Our two nations will surely benefit from our friendship.

Rejects Player's Declaration of Friendship: It is too early to make such a commitment. We will reconsider when appropriate, naturally. You do understand?

Requests Declaration of Friendship: We are pleased to consider you an esteemed friend. We hope the feeling is mutual...

Trade Deal Accepted: You have been most kind and attentive.

Denounced by Player: The Queen wishes to warn those who disrespect her people and her mandate of the manifold troubles that will ensue.

Denounces Player: We will have nothing to do with your administration. You are hereby denounced.

Too Many Troops Near Her Border: Your army is not welcome at our borders. Remove them at once.

Invitation to Capital: In the interest of our political relationship, we would like to know more about your capital… in exchange for information on ours, of course.

Invitation to City: It is our distinct privilege to extend to you an invitation to visit the realm, which I imagine is rather simple due to our many colonies, of course.

Accepts Invitation from Player: We find this agreeable.

Married to Prince Albert, mother to nine children and 42 grandchildren (eventually making the House of Windsor related to nearly every monarchy in Europe), reigning over Britain and its empire for 63 eventful years, the young Victoria as heiress presumptive was groomed for the throne from a tender age. She would describe her childhood as “rather melancholy.” Her mother was ferociously protective and Victoria was raised isolated from other children under the “Kensington System,” an intricate set of rules and protocols for every facet of behavior. She was banned from meeting anyone deemed “undesirable” (which in her mother’s view was just about everybody).

Not surprisingly, the bright young woman – she was extremely well educated by private tutors in the Palace, which she very rarely left – chaffed at all the rules. Upon reaching her majority, the princess made two requests of her father the King: that she be permitted an hour each day to herself free of chaperones, and that her bed be removed from her mother’s suite and she be given a bedroom of her own. In May 1836 AD, she was introduced to Albert, Prince of Saxe-Coberg and Gotha, one of many suitors. She was quite taken by him alone, writing to her uncle, King Leopold of Belgium who had introduced them, to thank him “for the prospect of great happiness... in the person of dear Albert.” But being just 17 years old, she declined any notion of marriage as yet.

Britain was only saved from a likely unfortunate regency under her mother and her mother’s lover the ambitious Sir John Conroy (a prospect feared by King William, who declared he wished only to live until Victoria came of age to rule) by Victoria’s 18th birthday in May 1837. Her father died less than a month later, and she became Queen of Great Britain. One of her first acts was to banish Conroy from her presence and cut all personal ties with the dowager queen. Albert returned to London to renew his friendship with Victoria; they were married five days later at Windsor Castle in October 1839. Whatever his faults, he had a stabilizing and relaxing effect on Victoria, who was also intellectually bewitched by his beliefs in social reform and “modern” innovations.

Victoria’s long tenure as queen could be seen as a litany of wars in far-away places: Anglo-Afghan Wars, Opium Wars, Anglo-Sikh Wars, Xhosa Wars, Anglo-Burmese Wars, Crimean War, Anglo-Persian War, Indian Mutiny (which brought her the title of “Empress”), Ashanti Wars, Zulu Wars, two Boer Wars, Mahdist War, and Boxer Rebellion besides other military adventures. The reality of Pax Britannica meant a lot of bloodshed. Instead, however, she left all that foolishness to her many prime ministers and Parliament while she spent her days with her own pursuits... repeated pregnancies and, urged on by Albert, social reform for the lower classes.

England was suffering all the ills (and then some) of an industrial society, and the Crown as embodied by Victoria and Albert took a lead in addressing these. Some believed in the philosophy of self-help, whereby the misfortunate “cured” themselves of whatever ailed them, be it drink, drugs, or poverty. But many believed the government and/or the wealthy should look to better the collective lot of the unwashed masses. Hundreds of charitable foundations, many to which Victoria and/or Albert lent their reputations, were created across England. Social “experiments” such as Robert Owens’ utopian communities were launched. Authors such as Dickens and Thackeray brought attention to the plight of the working classes. Since British royalty still had some influence on affairs of government, if simply that of swaying popular opinion, Victoria weighed in on such reforms as the Elementary Education Act (providing free schooling for every child to the age of ten) and the Matrimonial Causes Act (making divorce a legal rather than religious affair, and allowing a woman to have full control of her own civil rights and finances afterward).

Meanwhile, Albert’s interest in science as a way of improving the people’s lot, shared by many of the upper class dilettantes who needed something amusing to do, rubbed off on Victoria. The Crown encouraged and even financed at times all those British adventurers traipsing about the world climbing mountains, trudging across deserts and toiling through jungles, killing or collecting exotic animals, going native with primitive tribes, and generally sticking their collective nose in everywhere. Rationalism was running rampant, and even Victoria was curious whether technology could save the social order and check the moral decay. Thousands flocked to see the displays at the Royal Horticulture Society, the Royal Society of London for Improving Natural Knowledge, and the Great Exhibition of the Works of Industry of All Nations (1851, the first “world’s fair”). On the practical side, the “Great Stink of 1858” led the Crown to help fund the greatest engineering feat of Victorian England: a sewage system in London.

In December 1861, Prince Albert died of typhoid fever. Heartbroken, the dour and stoic Victoria entered a state of mourning for the rest of her life. Although there were rumors that she took some comfort from John Brown's, her Scottish manservant, devoted and nigh-continuous presence. Whatever their relationship, after Albert’s death Victoria withdrew into seclusion in her castles and palaces, curtailed her public appearances, and rarely set foot in London for the remainder of her life.

By the time of Victoria’s Golden Jubilee in 1887, the British Empire was near its apogee. It was the world’s first true “superpower,” its tentacles reaching into every corner of society, culture, finance, and politics around the globe. The celebration, in accordance with Victoria’s wishes, was reserved – and moral – consisting of a procession and thanksgiving service in Westminster Abbey. As Victoria’s Diamond Jubilee approached, Victoria surpassed George III as the longest-reigning monarch in English or Scottish (or most anywhere else) history. Again, she insisted that the Jubilee be a festival of the Empire rather than her rule. In early January 1901, the queen regnant Victoria was feeling “weak and unwell”; she died quietly on 22 January, as dignified and reserved in death as in life. 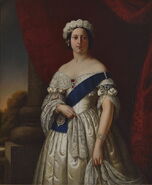