Movement while in coastal waters.

Wikipedia has a page called:
Longship

The Viking Longship is a unique naval melee unit of the Norwegian civilization (when led by Harald Hardrada) in Civilization VI. It replaces the Galley.

The Viking Longship is easily the best harassment unit in the game. Its battle statistics are superior in every way to the Galley it replaces, as it is cheaper (thanks to Harald Hardrada's leader ability), faster, stronger, and can heal in neutral water (thanks to Norway's civilization ability), but those are by no means its only good qualities. Thanks to the coastal raiding ability so early in the game, any civilization with coastal cities is in grave danger - if Harald decides to attack, no tile next to the Coast is safe, and neither is any civilian located on such tiles.

As if all of its inherent qualities over the normal Galley are not enough, the Viking Longship also ignores all zone of control. This feature, whether intended or not, is not mentioned anywhere in the game but is coded as such in the game files and still fully functional to date. This means that it is borderline impossible to catch and kill a Viking Longship with standard Galleys, unless it is completely surrounded, but with the improved stats and cheap cost, any counterplay against the Viking Longship in the early eras is very costly.

The best strategy for using Viking Longships is to survey and locate any civilizations with coastal cities as quickly as possible, then declare a Surprise War on them and invade with Longships. Before the enemy knows what hit them, the Norwegians will have pillaged everything...and, without actually taking any territory, amassed some nice plunder to boost their early development! This strategy is very strong in Gathering Storm since pillaging now scales into the late game, and under Harald Hardrada, Norway can actually gain

Culture from raids, which will further bolster their already impressive early game. There is practically no counterplay to this, since this unit is stronger, faster, and cheaper than the regular Galley, and most importantly, since Norway can cross Ocean tiles earlier than most civilizations, it can retreat into deep water and heal in neutral water. This "camping" tactic will make every civilization in the game think twice about coastal settling when Norway is present.

'A furore Normannorum libera nos, Domine.' The famous prayer, usually uttered by hapless folk upon first sight of the sails of the Vikings’ longships, sums it up. From Ireland to the walls of Paris, the longships carried the fierce Norsemen to kill and plunder. But they also carried Norse explorers across the North Atlantic to Iceland, Greenland, and North America. And traders as far as Rome and Constantinople. Indeed, the longships were the apex of European naval design from the 9th through 13th centuries. Viking longships came in various types; by far the most infamous is the drekkar, a graceful, narrow, shallow-draft vessel, ornately decorated (dragons and snakes and the like), used primarily by those who went raiding. Not only were the drekkar able to sail deep waters, but their shallow draft meant these could navigate up rivers … useful in pillaging cities like Paris. 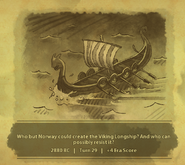