Civilization: Beyond Earth
Virtues are an orthogonal system to complement and augment your technology choices and play style. Whereas a player's technology path may be a series of adaptive choices to the environment and circumstances, Virtues represent the player's long term choices about style and flavor which are more removed from immediate circumstances.

Virtues are acquired by accumulating

Culture over time (the mechanics are virtually the same as in Civilization V). All culture your colony is producing from all sources is gathered in a pool, and whenever a certain threshold is reached (based on how many Virtues and Cities you already have and the difficulty you're playing at), you can select and activate one Virtue.

There are four distinct categories of Virtues: Might (Military), Prosperity (

Production). Each one category is aimed at enriching a specific gameplay aspect (which one is rather obvious by the name). You don't need to 'unlock' a certain Virtue category in order to acquire anything in it - all four categories are available right from the start, without any restrictions. However, unlike Civilization V, each category has three times the number of individual Virtues in it, which are organised in Tiers 1 - 3. Individual Virtues within each category are furthermore organised in a tree, so that you need to adopt the lesser ones first, and then make your way 'down' the tree. So, although you have the freedom to choose whichever of the four categories you want right from the start, you will have to develop each category methodically, in order to reach higher tiers and more powerful virtues. 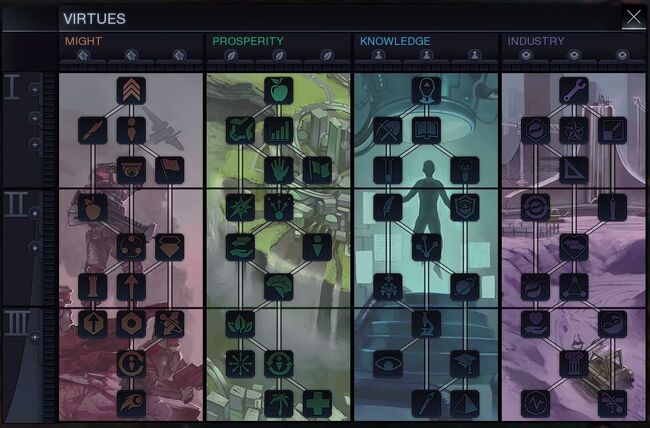 Acquiring a certain number of Virtues from the same category or the same tier yields an additional synergy bonus. For example, after you get 5 virtues from the Might category, you get a special bonus; when you get 6 virtues of tier 1 you also gain a special bonus. Each synergy bonus is different, both for category- and tier-related. In general, category bonuses are oriented towards the same aspect the category develops (see each category for the specific bonuses), while tier bonuses have a more general benefit (see below). To unlock them, simply purchase enough virtues in the given tier/category.

This system allows great flexibility in developing your virtues. You could choose to develop consistently a single category and acquire quickly its level 2 and 3 virtues and synergy bonuses; or you could choose to develop two categories simultaneously; or even three... Of course, the ever-increasing culture price of subsequent virtues imposes a practical limit on how many virtues you could get, so plan ahead of time and look at strengthening aspects of your colony which are consistent with your overall strategy, or which are otherwise lacking.

Might deals with all things military, bringing benefits from combat or cheaper/better Units, or lowering the cost of building and maintaining your combat forces. Those looking to expand through force of arms, whether fighting Aliens or other colonies, will likely pursue the Virtues of Might.

Growth are the focuses of the Virtue of Prosperity. Whatever the medium of exchange and the benefits of hard work, players who seek to have large cities and healthy citizens to fill them should consider the path of Prosperity.

It has been said that "knowledge is power." This Virtue is devoted to improving research towards new Technology, and should excite those excited about the shape of things to come. The Virtue of Knowledge is not limited to

Science, of course, but encompasses artistic expression as well.

Industry is the Virtue for those seeking to increase wealth and productivity. It offers bonuses in

Production, along with some other benefits to ensure these aren't wasted. It may be that hard work is its own reward, but it is nice to get something out of it.

The original virtues screen seen below has been replaced since the release of Rising Tide both in the base game and the expansion. 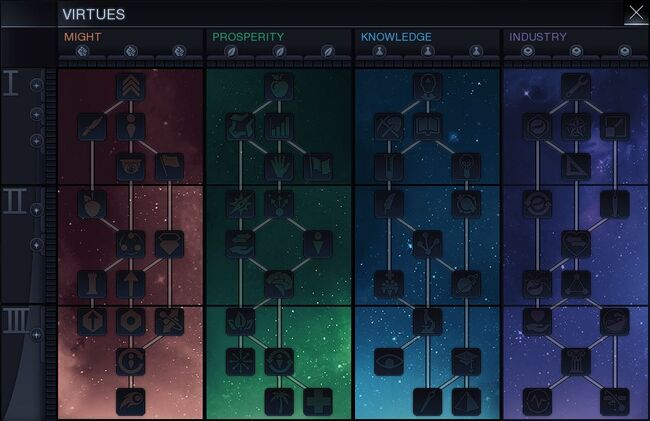