Ranged unit of the Medieval Era

Vietnamese unique Medieval era ranged unit. They can move after attacking and have additional movement. These units are also stronger when defending, more expensive, and have greater sight.

The Voi Chiến is a unique ranged unit of the Vietnamese civilization in Civilization VI. It replaces the Crossbowman.

Just in case the Vietnamese vast swathes of Woods are insufficient in slowing down enemies' advance in the Medieval Era, they also have the Voi Chiến, a unique Crossbowman. As if the Crossbowman itself is not already the heart of any Medieval battle (read more here), the Voi Chiến has its own set of bonuses, combined with Bà Triệu's leader ability, catapulting it to become an absolute menace.

The most outstanding factor of the Voi Chiến is the ability to move after attacking, reminiscent of the Camel Archer's reign of terror in Civilization V. This simple ability can have many applications, but above all, it lets the Voi Chiến to (almost) ignore zone of control. Contrary to popular belief, in Civilization VI, zone of control does not force you to stay on the same tile until the next turn, it only forces you to carry out an attack. Therefore, units that can move after attack can weave in and out of a hostile zone of control within the same turn. This is not as strong as completely ignoring zone of control, but it is close to it, since the Voi Chiến can always free itself by attacking the unit or

District that is currently exerting control on it. There are currently two other units in the game with this ability: the Russian Cossack and the Guerrilla-promoted recon units. While Cossacks ignore all zone of control, and recon units barely do any fighting (with the only exception of the Warak'aq), the Voi Chiến is undoubtedly the biggest winner with this ability. Another popular application of this is the unparalleled capability to focus-fire. With a

Movement from Bà Triệu's ability if starting in appropriate features, legions of Voi Chiến can nimbly take turn moving in and out to shoot down a city. Even wounded units can still contribute their damage and then manage to safely retreat to the backline. That is not all, a Voi Chiến can attack to earn experience, and if it is eligible for a

Promotion, it can promote and heal within the same turn.

As if it is not already a tall order to kill just one Voi Chiến due to their mobility, there are other factors in the Vietnamese arsenal that also play into the power of this unit. A Voi Chiến that ends it turn on a Woods or Rainforest tile outside Vietnamese territory, ignoring the fact that it will gain extra mobility next turn, can gain a massive 8

Combat Strength if this is a Woods or Rainforest Hills tile. Combined with the fact in Medieval Era, Vietnam is almost guaranteed to have a

Great General (since they are the only civilization in the game incentivized to put down Encampments in every city), their defense strength can reach an astonishing 51

Combat Strength, and none of these conditions are far-fetched or hard to align with one another. That does not even count if the tile the Voi Chiến is on is inside Vietnamese territory, the defense strength will reach 56. The strongest Medieval unit is the Malian Mandekalu Cavalry, with

Combat Strength at 55, a Mandekalu Cavalry with no additional

Combat Strength is incapable of pushing the Voi Chiến around when it is on full defense mode, and remember, this is a ranged unit. The best

Promotion line for the Voi Chiến is Garrison, Incendiaries and Suppression, to maximize their damage against cities and to hinder enemy's

Movement with their presence. They are so tanky that the tier III

Promotion Emplacement seems like an overkill, especially when your Voi Chiến will retreat to safe spots outside of the City Center's reach after attacking anyway.

On a side note, Garrison is an extremely overpowered

Promotion for all Vietnamese ranged units, especially on defense. Normally, that

Combat Strength when the unit defends on a non-defensible specialty

Ranged Strength when attacking out of one. Considering that Vietnam has to build their specialty

Combat Strength when defending on a specialty

Combat Strength from terrain modifiers. When attacking out of a specialty

District, it can gain 20

Ranged Strength if the enemy is standing on a removable feature. On offense, it is slightly weaker, but still effective. Foreign

Districts are not built on features, and tiles with features in other empires may not be as dense as inside Vietnamese territory, so it will only gain 10

Combat Strength on defense and 10 to 15

Ranged Strength, as long as it can find a

District (doesn't have to be a specialty

District in this case) to occupy. This

Promotion plays so well into the Voi Chiến's inherent tankiness and superior mobility, especially when the leader and civilization abilities are brought into the equation.

A really powerful tactic that is often employed in multiplayer games that you can use in your single player games is to spot out an open area next to the target of your conquest where there are some Woods and Rainforest tiles and put down a city right there. Next, assign a Governor, and run both Limitanei and Praetorium to hold on to this city and use it as a base to launch your attacks. Your Voi Chiến can now wage an offensive war with 6

Movement per turn, more than enough for them to move, attack and come back, and with maximum

Combat Strength on defense. This tactic allows you to start conquering before researching Medieval Faires and still be able to unlock the fullest potential of your leader ability, and there is no obvious counterplay to prevent this, since unlike Civilization V, it is impossible to remove features in neutral territory.

A bit less important, but extra

Sight is also nothing to scoff at. The idea of having a

Sight bonus is often underestimated, since most units with extra

Promotions in the game are units with melee attacks, not the best classes to make use of this statistic. On a ranged unit like the Voi Chiến, however, it can make a difference between whether you can get your attacks in this turn or have to wait until next turn.

Promotions on them. Upgrading an Archer into a Voi Chiến costs 290

Gold when upgrading into a regular Crossbowman. It is quite pricey, especially when you are still far away from the Professional Army policy card, but the investment is definitely worth it. Vietnam's starting bias towards Woods and Rainforests means they likely will start with Plantation and Camp luxury resources that grant a lot of

Gold, so make sure if you save up when you are about to unlock Machinery. In order for a Voi Chiến rush to be successful, try to save enough to upgrade at least 3 Archers, if you want to build more, you can pick up Feudal Contract (unlocked with Feudalism), which is convenient because it is on your way to Medieval Faires. Once you have Medieval Faires, bring a few Builders with you so they can put down Woods in your territory next to the enemy city you want to conquer and use these tiles as the stepping stones for your elephants. A Voi Chiến starting on these Woods tiles will have 5

Movement, 6 if next to a

Great General, 7 if the Logistics policy card is run, they can shoot, then move back onto those tiles to end their turn and repeat this cycle until that all cities fall like dominoes.

In Southeast Asian civilizations from Burma to Siam to Cambodia, the elephant is the quintessential symbol of royal power. A Southeast Asian knight astride a war elephant and wielding a long spear would have been a formidable foe, and an elephant with a crossbow on its back could be a deadly and mobile siege weapon. Even with the advent of gunpowder, the high perch that an elephant’s back afforded would give a sharpshooter an impressive tactical advantage. In Vietnam, war elephants - voi chiến – were used to stop the Mongol advance in the 13th century. But the elephant was important in Vietnam long before that, both as a weapon as well as a symbol of power. The Trưng sisters in the first century AD rode elephants into battle in their war of rebellion against the Chinese Han dynasty. Later, Bà Triệu, in yet another conflict with China, is also depicted astride a war elephant.

While elephants could resist musket fire, cannons were another story. By the twentieth century, war elephants fell largely out of use, although the Vietnamese still used them to move supplies and troops quickly and quietly through the jungle during wars against the French, United States, and China. Such support elephants are still used today by Kachin rebel groups in Myanmar (former Burma).

Voi Chiến and Thành in game 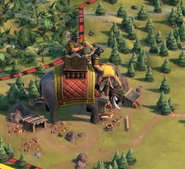 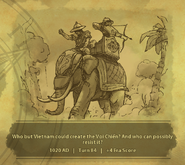