Sumerian unique Ancient era unit. Stronger than all other starting units. No penalties against anti-cavalry units. 4

Movement if this unit starts in open terrain.

Wikipedia has a page called:
Chariot

The War-Cart is a unique heavy cavalry unit of the Sumerian civilization in Civilization VI. It is available without any technological research.

The War-Cart is the premier unique unit of the Ancient Era. Compared to the Heavy Chariot, it is superior in every way - it's stronger, faster, has a lower

Gold maintenance cost, is available from the start of the game, and has no vulnerability to anti-cavalry units. This makes the Sumerians a terrifying early rusher. A determined player should start building War-Carts from the beginning of the game, and since many copies of this unit alone can form a powerful army, make sure not to waste your precious

Production on Scouts, Warriors or Slingers. Having your most powerful asset available right from the get-go also means if you don't fully take advantage of it, your civilization will enter later stages of the game without anything going for itself.

Sumeria direly needs a successful rush with War-Carts in order to stay competitive, all other bonuses of theirs are purely complimentary and cannot win games on their own. They need to be able to secure a good foundation, starting with a vast empire next to severely weakened neighbors. For this reason, any civilization with a powerful unique unit in the Ancient Era is a baneful neighbor for Sumeria, most notably the Aztec, Gauls, and Nubia. Vietnam, thanks to their incredibly overpowered defense mechanic and starting bias, is also a nightmare for Sumeria. There is very little Sumeria can plan when spawning next to these civilizations; you have to rely on your luck (how good your starting location and

Production are, and how ill-prepared your neighbors are).

Due to the nature of Sumeria and how dependent it is on a good War-Cart rush, it is one of, if not flat out the worst civilization to play on high difficulty. The higher the difficulty and the wider the map is, the worse Sumeria becomes. For example, on Deity, the AIs start with 5 Warriors, 4 global

Production to build even more units. The key strategy for Deity is about catching up and trying not to confront the AIs at their strongest, a luxury that Sumeria cannot afford. They have to start their conquest directly into the AIs' walls of units, and have to rely on the AIs' inablity to properly defend themselves, and if this doesn't work out, Sumeria becomes a vanilla civilization with very little going for themselves. And of course, the wider the map is, the longer the game will last, the more time other civilizations will have to use their much more lasting bonuses. Sumeria should only be played if you want a difficult challenge, as it is not well equipped for those particular environments.

The nigh constant wars (more like backwood feuds than armed conflicts) between the Sumerian city-states helped develop a couple of innovations in killing that would spread across the ancient world. The first battle ever recorded for posterity was between Lagash and Umma c. 2525 BC as depicted on the “Stele of Vultures.” Among other things of interest, the stele shows the commander Eannatum riding in a “chariot” – actually, more a four-wheeled cart pulled by asses (the animals, not the humans). The Sumerian war-cart was a four-wheeled device composed of a woven basket mounted on wooden, solid wheels; it was manned by a crew of two carrying battle-axes and lances and pulled by a yoke of four onagers (those Asiatic asses). Although shown on this and other stele, there is considerable debate as to whether the war-carts were actually used in combat, or served more as a “battle taxi,” carting the commander around to strategic locations where he could dismount and lead his troops personally in the melee. Whatever the function, the Sumerian war-cart was the genesis for the later horse-drawn war chariot. 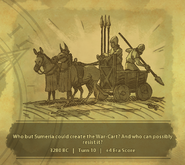 Historic Moment for building the War-Cart
Community content is available under CC-BY-SA unless otherwise noted.
Advertisement