Recon unit of the Medieval Era

Incan unique Medieval Era unit that replaces the Skirmisher. Stronger than the Skirmisher and +1 additional attack per turn if movement allows.

Wikipedia has a page called:
Slinger

The Warak'aq is a unique recon unit of the Incan civilization in Civilization VI: Gathering Storm. It replaces the Skirmisher.

The idea of having a unique Recon unit is often scoffed at, due the underwhelming impressions made by the Okihtcitaw and the Highlander. However, the Warak'aq is surprisingly potent at dishing out a huge amount of damage, making them a reliable tool for the Incan to advance towards a Domination Victory if they wish so. This is the only unit in the game that can attack multiple times per turn without any

Promotion, so it has basically twice the firepower of the Crossbowman, the premier military unit of the Medieval Era and a lot higher maneuverability, at the cost of its

Range. With a little bit of preparation, the arrival of the Warak'aq can be the harbinger of downfall to all unwitting neighbors of the Inca.

The first step is to accrue

Gold and train Scouts en masse from the Classical Era to prepare for the arrival of the Warak'aq. Scouts are the cheapest units in the game with no maintenance cost, standing at only 30

Production, combined with the growth and early

Production power of the Inca, this should not be a problem. The problem is how to save enough

Gold to upgrade all of them, since at this point, you most likely have not researched Mercenaries yet. A Warak'aq is 135

Production more expensive than a Scout (equivalent to 540

Gold to upgrade a Scout into a Warak'aq! Although Pachacuti's ability incentivizes you to send internal

Trade Routes, it is recommended that in the first two eras before the Warak'aq, you should dedicate all of your

Trade Routes to generate as much

Gold as possible, since your Terrace Farms will do a much better job than you ever need in growing your cities. It is also recommended that you establish Victor with the Embrasure title in the main Scout-producing hub, so that all of these Scouts will start with a

Promotion to boost their ability to traverse terrains. Since in the Classical Era, you probably have explored every Natural Wonder and Tribal Village around you, and Scouts do not fight Barbarians, so this is important to get them off to a good start. Meanwhile, you should beeline Mercenaries to get access to Professional Army, which is not very hard, since it only has 2 immediate prerequisites, one of which is Feudalism, an important civic that you would want to beeline anyway as the Inca.

With the Survey policy card and the fact that the Warak'aq can attack twice, it mathematically benefits from 4 times more XP than an average Recon unit, helping it reach the Ambush

Promotion quickly and reliably. With a 60

Ranged Strength unit with a 40

Movement and advanced maneuverability from his Ranger and Alpine promotion that can run far away after attacking, a high-level Warak'aq is no longer a glass cannon, but now simply a maneuverable cannon that is impossible to deal with. Just for a better visualization, this is a unit that is unlocked at the same technology as the Crossbowman, a standard unit with much notoriety on the Medieval battlefield, and a Warak'aq with the Ambush

Promotion has twice the damage output of a Field Cannon, the upgrade of the Crossbowman that comes 2 eras later. A timing push with an army of Warak'aq can be deadly, even to the most aggressive civilization who focuses a lot on building an army, so even if you have no plan to win a Domination Victory as the Inca, make sure to claim some crucial neighbor territory. Like it is mentioned above, as long as your Warak'aq can earn the Ambush

Promotion, which is very easy to do with the Survey card, its cheap price (compared to units of later eras) and its ridiculous firepower mean its relevance can last until you are done with conquering and not because your enemies manage to research a way to deal with it.

Literally translated from Quechua, this word means “the one who throws stones with a sling.” Slings have been associated with the Native American civilizations, but most especially with the cultures of the Andes. Even today, Andean herders continue to use the sling to protect their flocks, preserving the ancient heritage of this missile weapon.

Inca warriors had access to a variety of weapons, ranging from distinctive bronze maces, hardwood clubs, and spears to javelins, bolas, and the sling. Warriors, particularly those of the upper class, would be well-decorated and elaborately ornamented to impress the enemy, with brightly-decorated fabric tunics and feather headdresses, or equipped with various kinds of padded armor. But the efficacy of slingers made an impression on the Spanish Conquistadors, and they were a common weapon among native uprisings against the Spanish colonists.

Andean slings are generally long and most frequently made from llama wool. The braiding is generally done in contrasting colors (black and white are most common). Since herding was a common profession for Incan men, there was a ready pool of manpower accustomed to using the weapon. Archaeologists have uncovered caches of sling stones in fortifications throughout the Andes, indicating careful preparation and consideration for the slingers. The sling is, in many ways, the ideal weapon for the Andes: Ammunition is in ready supply, and the difficult terrain makes more complicated missile weapons an iffy proposition. The sling is portable, easy to construct, and deadly in trained hands, as the Inca's enemies learned to their detriment. 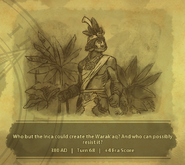