The Warrior is an Ancient Era melee unit in Civilization VI. It is available without any technological research.

Armed with a club or a stone axe, the sturdy Warrior is the backbone of an ancient army. It is the first melee unit of the game, and you spawn with one at the very start of the game, along with your Settler. As usual, Warriors are good against the first Barbarian scum and for defending against early rushes by aggressive neighbors, but they quickly grow useless in the Classical Era.

Warriors are also free of maintenance, so you can make a whole army of Warriors without running the risk of going bankrupt. Just be warned that when they upgrade, your

Civilization VI adds a new bonus to all melee units: they now do additional damage against anti-cavalry units (such as the Spearman). This makes them effective against Barbarians, who usually have a Spearman guarding their outposts at all times.

According to the dictionary, a "warrior" is a person engaged or experienced in warfare. In primitive societies, that's just about everyone since everyone fought everyone else. After all, it didn't take much training to bash someone in the head with a rock or club, just some stamina and a strong stomach. Thus, early tribes and settlements did not have a professional standing army; that's the benefit of civilization. Instead, all the able-bodied served in a loose militia, called to face a crisis and then returning to their farms and villages when it was past (or sometimes before). It would be centuries before some ancient kings had the foresight and wherewithal to maintain an army, with specialists in various weapons replacing the old warriors. 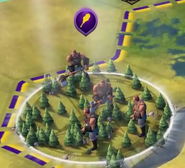 Roman Warriors on the map