George Washington (22 February 1732 – 14 December 1799) was the first President of the United States of America and an important general in the American Revolutionary War. He leads the Americans in Civilization V.

George Washington speaks American English with a modern Virginian accent. On his diplomacy screen, he is inside a colonial style house - possibly Mount Vernon, his personal plantation. Alternately, this house could be located in New York City or Philadelphia, early capitals of the U.S.A. (The famous White House was not yet built during Washington's terms.) Washington's outfit and the room's decor appear to be inspired by the Lansdowne portrait, and the Oracle can be seen in a painting hanging over the fireplace in the background.

George Washington prefers to try for a scientific victory, though he may attempt a diplomatic or cultural victory under certain conditions. Domination victories will be less common.

Washington is one of the easier leaders to befriend and is loyal to his allies. He is bold, but not particularly aggressive, and is very forgiving as long as he does not see the player as a warmonger.

Washington focuses on founding and developing cities and keeping his people happy. His infrastructure will only be average, but his army will often be the largest in the game.

Washington is fond of using reconnaissance units and spies to establish surveillance in distant lands. During the later eras, he will make liberal use of air and anti-air units, and is also very likely to use nukes.

Washington tends to be friendly toward city-states. He can sometimes ask for tribute from them, but will rarely try to conquer them.

George Washington was one of a group of remarkable men who lived in the American Colonies in the late eighteenth century. Although not as pugnacious as John Adams, as imaginative as Benjamin Franklin, or as brilliant as Thomas Jefferson, Washington had the capacity to lead, in war and in peace. He led the Continental Army to victory against extraordinary odds, and by so doing he led his country to independence.

The descendent of English colonists who migrated to Virginia in 1657, George Washington was born into a family of wealth and privilege - or rather, as much wealth and privilege as could be found in the Colonies in the early eighteenth century. As a young man, Washington studied mathematics, writing, geography and probably Latin, but he never attended college. Instead, he concentrated upon learning how to raise stock, farm and manage his family's growing estates. Washington was also trained as a surveyor and spent several years scouting and mapping the lands in and around the colony of Virginia.

In 1754 war broke out between England (and her colonies) and the French and their allies the Indians. Washington fought in several engagements during this war, showing a great deal of courage and coolness under fire, but no especial strategic or tactical brilliance. Eventually the war ended with the English victorious, and Washington resigned from the Colonial forces with the honorary rank of Brigadier General.

After the war, Washington married and devoted himself to his growing estates. He apparently greatly enjoyed managing his farms and plantations and was not above shedding his coat and helping with manual labor. He also sat in the House of Burgesses in Williamsburg, the mostly-impotent local governing body of Virginia (real power definitely resided with the Royal Governor of the colony and with King and Parliament back in England).

Although a loyalist, Washington too chafed under the growing burden of taxation placed on the Colonies by Parliament (largely imposed to help pay off debts from the recent French and Indian War). As tensions grew and England ratcheted up the pressure on the Colonies, Washington's position grew more radical, and by 1768 he declared himself ready to take up arms against England whenever his country called him. By 1774 Washington was a member of the Continental Congress, the first truly national organization of the nascent country. When actual fighting broke out in and around Boston in 1775, Washington was named as commander of the military forces of all of the Colonies, a post he maintained once actual independence was declared in 1776.

Commander of the Continental Army[]

As military commander of the Revolutionary forces, Washington displayed the same strengths and weaknesses he had years before when fighting for England against France. He was personally courageous, almost to the point of foolhardiness. Early in the war he tended to favor overly-complex military actions beyond the capabilities of his volunteer soldiers, resulting in a series of near-catastrophic defeats at the hands of the professional British forces. But almost by force of will alone - through long, discouraging years of privation and defeat - he kept his army alive and in the field, and by so doing kept the revolution alive in the Colonies. Eventually, the sheer tenacity and growing skill of the Colonial Army and its general would win it the grudging admiration of even its fiercest enemies.

The entrance of France into the war on the side of the Colonies and increasing Colonial power and success on the battlefield led to growing anti-war sentiment of the British people. In 1781 Washington led his troops on a daring forced march into Virginia, where he (with the aid of a large contingent of French soldiers) besieged an entire British army on the peninsula of Yorktown. The French naval maneuvers having given them temporary command of the sea, the British general was unable to escape his predicament and surrendered his command. Although sporadic fighting continued for some months, the war was essentially over: America had won her independence.

President of the United States[]

After the war, Washington presided over the Constitutional Convention, which determined the form of the new nation's government, and later served as its first President. As President, Washington sought to keep the country free from foreign entanglements, resisting close alliances or wars with any. He attempted (with little success) to keep the country free from political party rivalry and strife. Washington served two four-year terms as President, and then retired back to his home in Mount Vernon, Virginia, where he died two years later in 1799.

Welcome President Washington! You lead the industrious American civilization! Formed in the conflagration of revolution in the 18th century, within a hundred years, the young nation became embroiled in a terrible civil war that nearly tore the country apart, but it was just a few short years later in the 20th century that the United States reached the height of its power, emerging triumphant and mighty from the two terrible wars that destroyed so many other great nations. The United States is a nation of immigrants, filled with optimism and determination. They lack only a leader to help them fulfill their promise.

President Washington, can you lead the American people to greatness? Can you build a civilization that will stand the test of time? 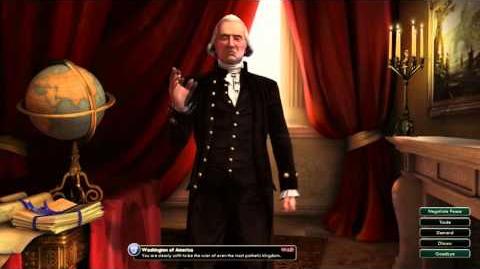 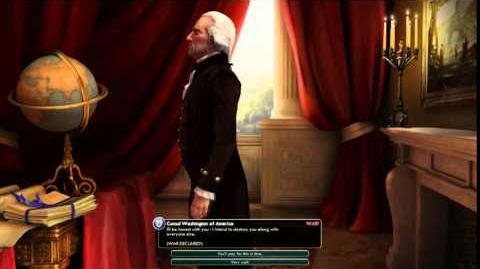 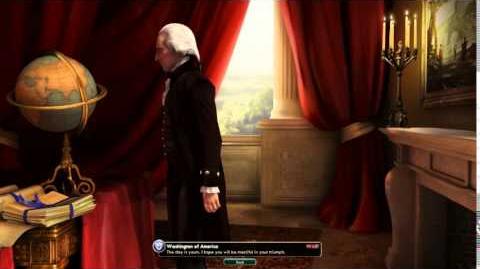 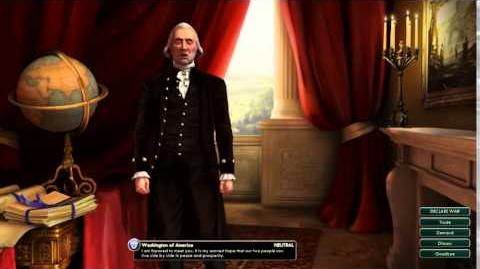