Wassily Kandinsky is a Information Era Great Artist in Civilization VI. He was added in the Babylon Pack.

One of the pioneers of modern art, Wassily Kandinsky fused painting with philosophy, reflecting a world profoundly changed over the course of World War I, the Russian Revolution and World War II, at each point when the world seemed to be breaking down and rebuilding itself from the basic elements up. Modernism as a movement is a reaction to this reshaping of the world – "modernism" here does not mean up-to-date, rather, it is an attention to and rearrangement of the basic elements that make up a work. Modern art tries to play with these basic elements, giving up trying to represent objects and instead asking what effect a certain color or angle or arrangement would have upon the viewer, without the mess of asking, "what is this a painting of?". In other words, two lines in opposition might create a sense of drama; one soaring line might evoke lyricism. Circles are peaceful; colors have inherent resonances with particular sounds. This is not symbolism – it is not that Kandinsky's canvases are mysteries to be decoded; rather, the elements themselves share a fundamental link in Kandinsky's theory. Kandinsky's theoretical work became influential to the larger modernist and abstract movement and remains so today.

Kandinsky's attention to the fundamentals emerged from his personal and spiritual beliefs. He saw these resonances between shape, color, and the viewer as reflecting deeper spiritual truths. He was attracted to theosophy and saw that movement's search for a universal divine reflected in his own search for the spiritual resonances of color and shape.

This spirituality caused some disruption to his life. Kandinsky was born in Moscow and studied art in Munich, but returned to Russia after the Russian Revolution. Within the USSR, he initially was influential in the development of the USSR art scene, but Kandinsky was profoundly spiritual and clashed with materialistic Soviet norms. Returning to Germany, Kandinsky worked with the modernist Bauhaus movement until the Nazi period, during which time he fled to France, where he lived for the rest of his life. He died there, just after the end of the war, unable to see the new, aesthetic world and movement that he hoped to create fully emerge. 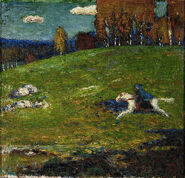 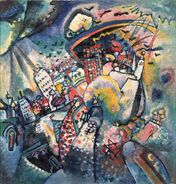