Amenity from entertainment to parent city.

Amenities from the Aquarium and Aquatics Center buildings extend to cities whose City Centers are up to 9 tiles away from the district.


The Water Park is a specialty

District in Civilization VI: Rise and Fall, dedicated to providing happiness and

Amenities to your empire. It requires the Natural History civic and must be built on a Coast or Lake tile adjacent to land.

The following buildings can be constructed in a Water Park:

The Water Park serves the same purpose as an Entertainment Complex, with three key differences: it is built on the water instead of the land, the

Science (prior to the March 2018 Update, in which Entertainment Complex buildings receive similar bonuses). It's particularly useful for seafaring civilizations like England and Indonesia, who tend to settle on foreign continents and remote islands and may have difficulty maintaining the Loyalty of their cities as they grow. Water Parks are also a great way to get usage out of small lakes within your borders.

Throughout history, one of the most popular activities in a city has been to leave it when the summer gets hot. As public transportation offered cooler options to a broader range of people during the Industrial Revolution, beach resort towns saw a boom in their popularity, and expanded their range of offerings to include amenities like boardwalks and amusement park rides in addition to the beach (or lake, or big river, or whatever local water feature… featured) and boating. What was once the domain of only the rich and powerful is now available to millions, and as the sun rises, the water park opens to keep people entertained and cool against the summer sun. 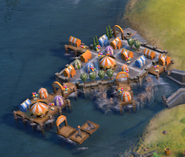