Wikipedia has a page called:
William the Silent

William I (24 April 1533 – 10 July 1584), also known as Willem van Oranje, William of Orange, or William the Silent, was the main leader of Dutch revolts against the Spanish in the Eighty Years' War and the founder of the United Provinces in 1581. He leads the Dutch in Civilization V: Gods & Kings.

William I speaks an archaic form of Dutch, which still resembles the Dutch spoken in the southern part of the Netherlands. (In reality he would have spoken French, though he could have spoken some Dutch as well.) On his diplomacy screen, the room in which he is standing resembles the one in The Geographer, a painting by Johannes Vermeer. He carries a book that he reads when the player first meets him and sets on the table when defeated.

William will likely aim for either a diplomatic victory or a cultural victory.

William focuses on building his navy, as well as

Happiness. His empire tends to have a well-developed economy and many tile improvements, and his water connections will be some of the best.

Despite his emphasis on naval forces, William shows a pretty small interest in raising a strong army. His cities, however, will be very well defended.

William is generally a trustworthy ally, as he is very loyal and likes to declare friendship. This may change, however, if William sees the player as a warmonger.

William will also try to befriend and protect city-states. He will hardly ever attempt to conquer or bully them.

Widely considered both founder and liberator of the Netherlands, William, Prince of Orange, also known as "William the Silent," led a successful rebellion in the mid-16th century against the Spanish Habsburg Dynasty who held dominion over the Dutch Low Countries. Once the loyal servant of King Philip II of Spain, William eventually became the most prominent leader of the rebellion, as his growing distaste for the continued Spanish persecution of Dutch Protestants came to a head. Rallying his fellow noblemen to the cause, William became an outlaw in the eyes of the Spanish monarch and led the Dutch forces in a number of successful battles against the king before falling to an assassin's bullet in 1584.

Born to Count William of Nassau in 1533, William inherited the title of Prince of Orange at age 11 when his cousin Rene, then prince, died without an heir to his title and land holdings. During this period the Netherlands were controlled by Holy Roman Emperor Charles V, who ruled as leader of the Habsburg Monarchy, while also serving as king of Spain. While receiving all of the education and training expected of a nobleman, William later became a favored member of the Emperor's court. The emperor's connection to the Spanish crown would play an important role in William's future efforts to wrest control of the Netherlands from Spain.

Promoted through the ranks of the military, by his early twenties, William was already a commander in the Imperial army, while also holding various diplomatic posts as an advisor to the Emperor. However, William's favor with the Emperor came at the price of his faith, as his Lutheran upbringing was abandoned in favor of Roman Catholicism to facilitate his rise to power.

In 1555, Charles relinquished the crown of Spain to his son, Philip II. Philip was known for his ruthless disregard for the lives of the Protestants under his rule, showing little empathy for their beliefs and expanding the powers of the Inquisition against the Reformation. In serving his new king, William began to understand the true intentions of Philip, who had no qualms about wiping out the Protestants by whatever means necessary. Although William adopted Catholicism as part of his education, he was raised a Lutheran, and still firmly believed in the right of the people to follow their own beliefs. As the story goes, William overheard a conversation between Philip and King Henry II of France while on a hunting expedition, discussing the future extermination of the Protestants in both of their kingdoms. This event is said to have sparked William's decision to oppose Philip and Spanish control of the Netherlands.

In attempting to subdue the established Protestants in the Netherlands and drive them into exile or worse, Philip devised a system of "placards." These placards served as edicts making the practice of Lutheran and Calvinist beliefs an offense punishable by torture and death. So extreme was the persecution that many Dutch Catholics joined the Protestants in opposing Philip's policies.

William began to openly criticize the king in public, making his opinions on the matter clear, and encouraging others to stand up to repressive policies of Philip. In 1566, the Compromise of Nobles, a collective of noblemen from the Netherlands, petitioned the Spanish regent Margaret of Parma to end the persecution of Protestants within the Netherlands. Despite their efforts for a peaceful resolution, Philip rejected the forwarded petition, and in response, iconoclasm spread throughout the Dutch territory, leading to the destruction of Catholic icons across the country by Protestant rebels.

As iconoclasm spread along with increasingly public displays of forbidden Protestant worship, Philip sent the Duke of Alba, Fernando Alvarez de Toledo, known as the "Iron Duke," to the Netherlands to quash the uprising and deal with the rebels. Upon his arrival, the duke established the Council of Troubles, later known among the Protestants as "The Council of Blood," to oversee the trial and punishment of the rebels and their leadership. Many of those summoned to the council went into hiding, including William himself, but some 1000 or more Protestants are said to have been tried and executed at the hands of the Iron Duke.

While funding the uprising from his home in Nassau, William and the rebels established several armies to attack the Spanish on multiple fronts. The group of Protestant exiles and Dutch noblemen resisting the Spanish came to be known as the "Geuzen," or "Beggars," with the most prominent force being the "Watergeuzen" - the Sea Beggars. William used his wealth to fund the Sea Beggars and equip their vessels, which they used to raid coastal cities throughout the Netherlands, acting as privateers.

William's brother, Louis of Nassau, led an army of mercenaries and French Huguenots (French Protestants) against a Spanish force under the command of Jean de Ligne, himself a Dutch nobleman still loyal to Philip. Meeting at the Battle of Heiligerlee in the northern Dutch province of Groningen in 1568, Louis routed the Spanish army and Jean de Ligne was killed. Unfortunately, William and Louis' second brother, Adolph, was also killed while leading the Dutch cavalry. This historic battle is considered by historians to mark the onset of the Eighty Years' War, as the great conflict for Dutch independence came to be known.

At the Battle of Jemmingen shortly thereafter, Louis's army was crushed by the Spanish forces while attempting to seize the city of Groningen itself, forcing his retreat. William himself took up the charge and led an army of Dutch forces to several victories, inspiring the Dutch people as more and more cities throughout the Netherlands were wrested from Spanish control. Despite the Dutch gains, capturing and controlling much of the northern territory over the next decade, the Spanish continued to maintain a firm grasp on the southern Netherlands.

In 1573, the Union of Utrecht was signed in the northern Dutch city bearing the document's name, uniting the Northern provinces in opposition of Spain. Although not yet fully independent, the union clearly marked a turning point in rejecting Spanish governance of the region. While Spain still controlled the southern territories, in 1581, the Act of Abjuration finally served as a formal declaration of the Low Countries' independence from Philip's rule. Unfortunately for William, he would not live to see the Netherlands free from the grasp of Spain in its entirety.

With an ample hefty bounty placed on his head by King Philip, the first attempt on William's life soon followed, when the Spaniard Juan de Jauregui fired a shot at William in 1582, wounding him in the neck. Although William was gravely injured, he managed to survive his injuries, but his slow recovery limited his involvement in the rebellion. Less than two years later, William was again attacked by an assassin, this time by a French Roman Catholic named Balthasar Gerard. Attacking William at his home, Balthasar fired three shots, the fatal blow striking William in the chest.

In the coming days, Balthasar was tried and sentenced to death. His punishment was torture, which took place over the span of an entire week. Balthasar's only relief came when he was eventually beheaded.

William is revered today as both the founder of the Dutch independence movement and the sovereign nation as it stands today. Inspiring the people of the Netherlands to rise up against Spanish rule and the abuses suffered by the Dutch Protestants, William gave his life in pursuit of an enlightened view point that deemed it only fair that all men be allowed to follow their beliefs.

Hail stalwart Prince William of Orange, liberator of the Netherlands and hero to the Dutch people. It was your courageous effort in the 1568 rebellion against Spanish dominion that led the Dutch to freedom, and ultimately resulted in the Eighty Years' War. Your undertaking allowed for the creation of one of Europe's first modern republics, the Seven United Provinces. You gave your life to the rebellion, falling at the hands of an assassin in 1584, but your death would only serve to embolden the people's charge, and your legacy as "Father of the Fatherland" will stand as a symbol of Dutch independence for all time.

Brave prince, the people again yearn for the wise stewardship your wisdom afforded them. Can you once again secure the sovereignty of your kingdom and lead your people to greatness? Can you build a civilization that stands the test of time? 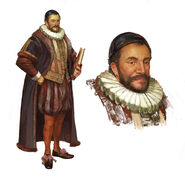 William of Orange, circa 1570
Community content is available under CC-BY-SA unless otherwise noted.
Advertisement