Mounted unit of the Renaissance era

Unique unit of the Polish civilization. Replaces the Lancer. Requires

The Winged Hussar is faster and more powerful than the Lancer, which it replaces. It is capable of forcing defenders to retreat when it inflicts more damage than it receives. A defender who cannot retreat instead takes extra damage.

This special ability is one of the most interesting in the game, and, needless to say, packs a punch! Normally you are able to activate it on (almost) every attack, unless you are attacking specialized anti-cavalry units. The Lancer is conceptually a unit designed to attack the weak links of the enemy lines - or alternatively, other cavalry - so you should never attempt to use it against powerful, fortified units. Try to surround enemy units, then attack with the Winged Hussar and eliminate them quickly! Even if you don't manage to corner the target, the displacement can have strategically important effects - for example, removing the target from a dangerous position.

Winged Hussars are especially useful against Barbarians. If your enemy has captured a civilian unit, this unique ability will rescue it, even if the Barbarian survived your attack! It can also be used to force Barbarians out of their encampments, leaving the Winged Hussar on the encampment tile and instantly capturing it.

The Heavy Charge promotion ability carries over to Anti-Tank Guns and Helicopter Gunships, allowing for pushes later in the game.

The "winged" type of hussar was introduced into the Polish-Lithuanian military by King Stephen Bathory in the 1570s. Winged Hussars generally carried a number of secondary weapons, usually a warhammer, a szabla saber, and one or two wheellock (later flintlock) pistols in saddle holsters. But their most distinctive accoutrement was the huge "wings," wooden frames attached to either the saddle or the rider's shoulders, covered with eagle, swan, goose or ostrich feathers. The purpose of the wings has never been definitely determined, but theories range from defense against enemy attacks from behind to making their own horse deaf to battle sounds, to intimidating enemy foot soldiers by making the hussars appear larger than normal men.

The most probable purpose of the wings was to make a loud, clattering noise which made it seem like the cavalry was much larger than in reality and frightened the enemy's horses. Other possibilities included the wings being made to defend the backs of the men against swords and lassos, or that they were worn to make their own horses deaf to the wooden noise-makers used by the Ottoman and the Crimean Tatars. 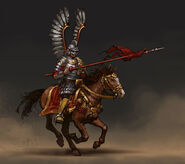