The Winged Hussar is a unique heavy cavalry unit of the Polish civilization in Civilization VI.

In the Gathering Storm expansion, the Winged Hussar replaces the Cuirassier and requires 10

With its mighty lance, high mobility, and intimidating stature, it's easy to understand why enemies want to flee from the Winged Hussar. It has higher

Combat Strength than any of the other units of its era by a long shot, and its ability to push back the enemy lines makes it a powerful weapon if Poland decides to go on the offensive. A force of 2-4 Winged Hussars can drive enemy units away from a besieged city and allow other Polish units to attack it without fear of retaliation. It's also great at clearing Barbarian outposts, since it can force the defending unit off the tile and capture the outpost in one fell swoop.

The Winged Hussar is superior to the Knight in conquest and becomes available much earlier than the Cuirassier it replaces, meaning that other civilizations have virtually no counterplay to this unit beyond training Pike and Shots en masse, who still barely have more

Combat Strength with their bonus against cavalry. Because of this, the only civilization that can reliably defeat a horde of Winged Hussars is Sweden, with their Pike and Shot replacement.

When attacking, if the Winged Hussar deals more damage than it takes, it can push the enemy back to 1 of the 3 tiles behind the enemy, not just strictly the tile directly behind. This unique dislocation mechanic allows for really cool tactics. You can go around the enemy lineup and break it by pushing a unit (most ideally a ranged or siege unit) towards your line of defense, push enemies out of their fortifications and take them for your own, push Barbarians out of their camps, or push enemies out of formation to steal or kill civilian units, or to simply reduce their flanking and support bonus. You can even push units onto water tiles, which is a cool tactic against armies with a lot of ranged and siege units, since these units cannot attack amphibiously, so they will waste at least one more turn to disembark, or become easy preys for your navy (if the enemy civilization ignores navigation technologies, their units will take extra damage instead). The possibility is endless. The possibility for messing up is also there though, since a lot of times players will forget about the knockback and send the Winged Hussars straight into enemies' line or firing range of City Centers and Encampments.

One more uniqueness of the Winged Hussar is that they are unlocked on the Civic tree, making early

Culture generation essential for Poland. Try to pump out as many new cities as you can, all of them will build Monuments as the first objective, go for a Pantheon that supplies

Culture (or Religious Settlements in Gathering Storm), appoint Pingala with the Connoisseur promotion immediately and beeline straight for Mercenaries after Political Philosophy. The only civic detour you should take on the religious branch is for Mysticism, so that you can unlock the Revelation policy card. If you want to go a step further, pick Choral Music as your Follower Belief, instead of Reliquaries, since the Domination path for Poland is much more secure than Culture relying on

Relics anyway (unless you are determined to go down the Cultural path, then take Reliquaries, but still, you do need to reach Mercenaries as fast as possible, ideally before other civilizations unlock their Knights). After researching Mercenaries, immediately switch to Divine Right to unlock Monarchy and the Chivalry policy card.

Science and Campuses do not matter too much for Poland at this point, once you start conquering,

Science will naturally pour in.

Polish military reforms of the late 1570s gave birth to the winged hussars, a fearsome heavy cavalry force who would enjoy their elite status for the next two centuries. Rather than fielding cavalry comprised of foreign mercenaries, Transylvanian prince Stephen Bathory (also Grand Duke of Lithuania, King-by-right-of-his-wife of Poland, and collector of increasingly impressive titles) filled the ranks of the winged hussars with Polish nobility and their retinues. The famed "wings" were wooden frames with feathers attached, borne on a rider's back to clearly distinguish them. It was said the distinctive sound of the wings startled enemy horses and demoralized enemy soldiers with an "evil hiss"—by novelists of later centuries, who likely romanticized a ceremonial accessory. Far less contentious a question are the lances, sabers, and pistols the winged hussars brought to the battlefield, which no doubt startled enemy horses and demoralized enemy soldiers. 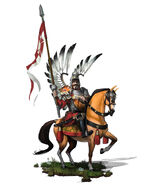 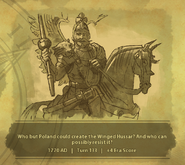