Wu Zetian speaks Mandarin Chinese (Modern Chinese), although the language she would have probably spoken would be Middle Chinese, which is no longer used today. On her diplomacy screen, she is standing in her palace. Concept art showed the entire palace court behind her.

Wu Zetian will go for a scientific victory most of the time, although on some occasions she may attempt a domination one instead.

Wu puts a priority on increasing her empire's

Population over expanding her empire. Sometimes, she may possess only one city and not found a new one until later. Because of this, Wu usually focuses mostly on

Wu tends to have a somewhat large army consisting primarily of ranged units, with a stronger emphasis on defensive militia. She is also one of the few leaders likely to make use of espionage.

Wu is rather difficult to befriend. While she can be very friendly, she is often disloyal and is likely to be guarded. Watch out for her deceptiveness, especially when you are friends with Wu, because she may end up declaring war on you. She is not too keen on waging wars, though.

Wu will often try to protect city-states, and likes to befriend them as well.

Like most civilizations, China has been male-dominated throughout much of its history. Until very recently, women were afforded few rights, and direct power was all but totally denied to them. For a woman to attain the rank of Emperor, to become the most powerful person in China, was almost unheard of. Only one person in the entirety of Chinese history was able to do so. That person was Wu Zetian, one of the most remarkable rulers - female or male - the world has ever seen.

At the age of 13 (in approx. 639 AD) Wu became a concubine of Emperor Taizong. She did not have any children with the Emperor, and at his death in 649 she left the palace to become a Buddhist nun, as was common for childless concubines at the time. That should have been the end of her story. However, Fate was to give her another chance at glory.

Like much of Chinese politics of the day, this gets extremely complicated. Empress Wang, the wife of the current Emperor Gaozong (son of the late Emperor Taizon), was afraid that Gaozong was becoming too infatuated with Consort Xiao. This was indeed a matter of some concern, as consorts had in the past been known to supplant empresses, who were often killed as a result. To divert her husband's attentions from Consort Xiao, the Empress had Wu - who was still young and beautiful - returned to the palace and reinstated as Consort.

This tactic was a complete success - too complete, in fact, for in a few years she had supplanted both Consort Xiao and Empress Wang in Emperor Gaozong's affections. Both ladies were killed, and she attained the rank of Empress. Some historians believe that she killed her own infant daughter and framed the Empress for the murder. While this is not proven, subsequent events have suggested that such an act was well within her scope.

As Empress Consort, Wu moved quickly to consolidate her power. Forging alliances with certain powerful officials, she had those who opposed her demoted, exiled, or killed. She was an able advisor to the Emperor, and he delegated more authority to her as time passed. By 660 AD, the Emperor began to suffer from a debilitating illness (which some said was caused from slow poisoning by Wu), and he passed much of the day-to-day management of the Empire to Wu, who was then about thirty-five years old. Wu showed herself to be an able administrator, with sharp wit and extensive knowledge of history and literature. She also showed a remarkable ability to seek out and destroy those who plotted against her as well as those who might someday pose a threat. When Emperor Gaozong died in 683, she was inarguably the most powerful person in China.

Following Gaozong's death, Wu's son Zhongzong became Emperor. He immediately began displaying troubling signs of independence, including appointing officials to important posts without consulting with his mother. This threatened to undermine Wu's power base, and she took decisive action. Zhongzong was deposed and exiled, and Wu's youngest son, Ruizong, became Emperor. Taking no chances this time, however, Wu kept the new Emperor in virtual isolation. Having no doubt learned from the unhappy example of his older brother, the titular Emperor kept very quiet and did nothing to offend the Dowager Empress.

In 690 AD, Wu took the throne herself, her son Ruizong reduced in title to Crown Prince. This caused a certain amount of displeasure among traditionalists, which Wu handled in her usually efficient and brutal manner. She expanded the powers of the secret police, who answered directly to her, and hundreds were exiled, imprisoned or murdered. She held this post for some 15 years, until, at the age of 80 and seriously ill, she was deposed. She died later the same year.

As a leader, Wu was considered to be an able administrator and shrewd judge of character. She promoted and supported able men, and in return she received their firm loyalty. Generals appointed by her conquered Korea, adding that wealthy land to the Empire. She was quick to destroy any she saw as a threat, and the early years of her reign as Emperor were bloody and repressive, even by Chinese standards. As she grew more secure in her throne, however, she reined in the secret police, and even her enemies grudgingly praised her for her competence and decisiveness.

In short, her rule was benevolent to those who were no challenge to her, and lethal to those who were. All in all, Wu Zetian remains one of the most fascinating rulers in history, and well worth further study.

Empress Wu placed great importance on the development of agriculture and commissioned many farming texts to be written. One of her methods of judging an official's competence was how well he cultivated his land.

The Blessings of Heaven be upon you. Empress Wu Zetian, most beautiful and haughty ruler of China! Oh great Empress, whose shadow causes the flowers to blossom and the rivers to flow! You are the leader of the Chinese, the oldest and the greatest civilization that humanity has ever produced. China's history stretches back into the mists of time, its people achieving many great things long before the other upstart civilizations were even conceived. China's contributions to the arts and sciences are too many and too wondrous to do justice to - the printing press, gunpowder, the works of Confucius - these are but a few of the gifts China has given to an undeserving world!

You, great Queen, who, with cunning and beauty, rose from the position of lowly concubine to that of Divine Empress - your people call out to you to lead them! Great China is once again beset on all sides by barbarians. Can you defeat all your many foes and return your country to greatness? Can you build a civilization to stand the test of time?

Portrait of Wu by an imperial painter 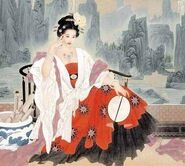