Xenomass is seen on the map as a greenish bubbling pool, and is a strategic resource that is special to Harmony players. It is always visible, and is accessed with a Xenomass Well. It is usually found underneath Alien Nests, but can also be found scattered elsewhere on the map. Alien Nests have a chance to respawn on any Xenomass tile that is covered by miasma, unless there is a player unit sitting on the tile.

The Xenomass is the primary source of alien life. As such, whenever there is a Xenomass tile covered in Miasma, you can be sure an Alien nest will eventually develop there; unless of course, you yourself start using the resource.

Apart of this special factor, the Xenomass offers rich opportunities for organic matter harvesting (once the proper safety technologies have been developed), turning into a great source of

Food for your colony. But apart of that, Xenomass can turn into an all-out contributor when you develop the above-mentioned technological upgrades, making it one of the most diversely-contributing resources to your colony.

Xenomass is required for the following units:

Xenomass is required for the following buildings:

Xenomass is required for the following wonders:

Known colloquially as “ooze,” “slime” or “Xenomass,” this biofilm is composed of undifferentiated eukaryotic myxogastria (class Mycetozoa) embedded within a self-generated matrix of extracellular polymeric substances, the composition of the latter dependent upon the local terrain and atmospheric conditions. The polymeric substances (exopolysaccharides) serve to circulate nutrients and catalyst molecules throughout the mass, which is thus highly adaptable. Xenomass fulfills a number of roles in the planetary ecology, not all yet completely understood, from food source to evolutionary trigger. Producing a natural nuclease, Xenomass can bring about homologous gene recombination to alter any endogenous gene, removing exons or rearranging sequences and thus introducing single-generation point mutations. This process can be reflected by stable physiological changes on the micro- and macro-level in short time frames, and has been a boon to those colonies following the Harmonic philosophy of adapting biologically to the environment through targeted mutations. Native flora and fauna tend to thrive on or near Xenomass concentrations, seemingly unaffected by the associated “Miasma.” Myxogastria reproduce through reticular, haploid spores, which are expelled in extensive clouds into the atmosphere – Miasma. These spores from Xenomass have proved poisonous to Earth lifeforms, and corrosive to plastics and most metallic compounds in its second trophic phase. Research projects to devise means of clearing Miasma are heavily funded by colonial administrations, even as research into uses of Xenomass in industrial, fuel and biological fields likewise accelerates. Despite the challenges of harvesting and working with Xenomass, it offers many intriguing possibilities for humanity’s advance on this planet … and elsewhere. 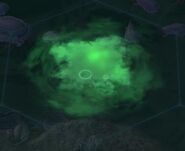