"Yosemite Valley, to me, is always a sunrise, a glitter of green and golden wonder in a vast edifice of stone and space."
– Ansel Adams

Yosemite is a two-tile impassable Natural Wonder in Civilization VI. Yosemite may be found on Plains and Tundra tiles. Each Wonder tile provides +1

Science, and +2 Appeal to adjacent tiles.

In Civilization VI: Rise and Fall, discovering Yosemite grants +1 Era Score, or +3 Score if the player is the first to do so.

Food in addition to +1

Science to adjacent non-wonder tiles (see diagram). However, as with all impassable wonders, the individual wonder tiles of Yosemite offer no benefits, and cannot be developed or improved. Yosemite is usually most effective when it is near the outskirts of a city (or even slightly beyond its borders), since the wonder tiles themselves are functionally dead space. If a city is strategically placed in this fashion, it receives the adjacency benefits of the wonder without sacrificing valuable space.

Note that the wonder tiles can be incorporated into National Parks - if a player wishes to found a Park, then it may be more efficient to place the city nearer to the wonder.

Densely forested with pine and flanked by the granite summits of El Capitan and Half Dome, 13-kilometer (eight miles) long Yosemite Valley lies in the western Sierra Nevada. Yosemite was originally called Ahwahnee by its original inhabitants, who called themselves the "people of the Ahwahnee valley," the "Ahwahnechee." But in a story that is all too familiar to the American West, the drive for resources (gold, in this case) brought European-American settlers, backed by the might of the army. In 1851, during a larger-scale war between California natives and the United States Army, the Mariposa Battalion attacked the Ahwahnechee inhabitants, led by their chief, a man called Tenaya. While Ahwahnechee remained following their defeat, the newly "empty" (at least, according to the state) region was to become a scenic park, the first of its kind in the United States, owing to its natural beauty and ancient stand of giant sequoia trees, and tourists and artists (including Thomas Ayres) flocked to the site. Ahwahnee's beauty remains, as do the Ahwahnechee, although the history of its founding is often overlooked underneath the land's natural beauty. 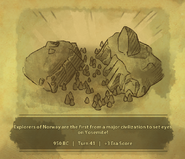