Great Merchant​ points if you own at least one of these tiles.


"With the sun shining brightly, then dusk’s mists falling, at every turn, the scenery changes like magic."
– Fan Zhongyan

Zhangye Danxia is a 3-tile impassable Natural Wonder in Civilization VI: Rise and Fall. Zhangye Danxia appears as a Mountain, and may be found within mountain ranges on Desert, Grassland, Plains, or Tundra tiles. Zhangye Danxia increases the Appeal of adjacent tiles by +2.

Great Merchant points each turn. (Owning multiple tiles does not increase the bonus.)

Discovering Zhangye Danxia grants +1 Era Score, or +3 Score if the player is the first to do so.

Different from the majority of Natural Wonders, Zhangye Danxia does not grant any tile yield, but

Great Merchant points. Hence this is not a Natural Wonder players should prioritize during the early game (Ancient and early Classical) in terms of helping you construct infrastructure but can help you earn a head start on important

Great General (if you are an early warmonger) or

Districts. However, if you plan on mass-building Encampments and Commercial Hubs (which you should not really go overboard and build Encampments everywhere), this Natural Wonder becomes rather redundant and insignificant, so don't go out of your way for it. Three extra Era Scores for settling nearby is nice, but it is definitely not worth settling in an indefensible spot, especially when the bonus cannot justify such action.

If you can't make a National Park out of your portion of Zhangye Danxia, it will still provides a good boost for a Holy Site or two.

The ragged sandstone mountains of Zhangye Danxia span over 120 square miles near the heart of modern China, in the foothills of the Qilian Mountains. Seemingly painted across its rugged landscape are bands of red, blue, green, and gold—a result of naturally occurring chemical reactions, erosion, and tectonic shifts between the Indian and Eurasian plates.

The colors of the “Rainbow Mountains” are so vibrant that photographs of the region can appear digitally filtered. The available light can further alter the coloration, making Zhangye Danxia a true wonder to behold at any time of day. 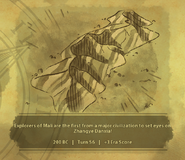