Culture if next to a river
+1

Wikipedia has a page called:
Ziggurat

The Ziggurat is a unique tile improvement of the Sumerian civilization in Civilization VI. It is available without any technological research.

As a rule of thumb, early

Culture are immensely valuable, and the Ziggurat provides both yields right from the beginning of the game without any technological requirement. Since Sumeria almost certainly will devote all of its

Production in War-Carts in the Ancient Era, the main purpose of the Ziggurat is to keep Sumeria from falling behind in research. As expected, it is very impactful in the Ancient Era, much less so in the Classical Era, and becomes more and more trivial as the game progresses. The Ziggurat has almost no potential of scaling, beside one extra point of

Culture with Natural History, which is too late to matter. It runs into the same problem as the Kurgan, another improvement with almost no placement restriction but provides no

Production: placing down too few and its effect will be negligible, but too many Ziggurats will stunt the growth and productivity of their parent cities. Finding the sweet spot of balance for this improvement is another conundrum, as it is available at the same time as your strong but expensive unique unit, both of which need to be immediately put into work, otherwise, your civilization will progress as if they were a vanilla civilization without any meaningful bonus. To make a problem harder, the point of availability is right from the beginning of the game, when you have no infrastructure to support the training of War-Carts, Builders, Settlers and building

Districts at the same time.

The easiest way to use the Ziggurat is to build one next to a river whenever you train or capture a Builder in the Ancient Era. Using 1 out 3

build charge is recommended because it is not too overboard, and

Culture at this point are crucial to keep you competitive during your early conquest. After the Ancient Era, you should capitalize on the vast empire the War-Cart is able to secure and try to generate

Districts and not waste too much space on Ziggurats. Also, since riverside tiles are ideal sites for a lot of

You can add a bit more mileage to this improvement by trying to obtain as many percentage based modifiers as you can. The most significant and obvious source is from Pingala, who provides 15% extra

Culture to his host city, a bonus that goes very well with the early availability of the Ziggurat. Later in the game, other more powerful modifiers such as Kilwa Kisiwani, Oxford University, Broadway, etc also become available, but of course, at this point, the yields from the Ziggurat are almost negligible, so these wonders are only meaningful if you have a vast empire with good

District placement. In summary, just like the rest of the Sumerian toolkit, the sole purpose of the Ziggurat is to lay a sound foundation upon which you can build your empire, it is not the kind of improvements that have long lasting effects that you can rely on after Classical Era.

When the Egyptians were building pyramids along the Nile, the Akkadians, Sumerians, Elamites, Babylonians and Assyrians were building ziggurats all over Mesopotamia. These were terraced pyramids, sometimes truncated so a temple could be placed on top. The earliest date from the Early Dynastic Period, roughly 2900 to 2400 BC, and the newest found date to c. 600 BC. Sun-baked bricks made up the center, and were faced with fire-glazed bricks that were more durable. Unlike the Egyptian pyramids, the ziggurats were generally solid, with shrines and temples on the summit, occasionally more than one (since one didn’t want to offend any god). Sadly none of the shrines or temples have survived – thanks to war, earthquakes and religious fervor – although the great piles of brick have. There were a number of “great” ziggurats, including the one in Babylon dedicated to the god Marduk which may have inspired the fable of the Tower of Babel. 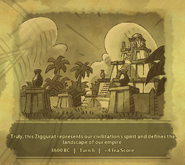 Historic Moment for building the Ziggurat
Community content is available under CC-BY-SA unless otherwise noted.
Advertisement